Mike Young’s first ever World Rally Championship (WRC) event has been a great success after he and co-driver Malcolm Read finished first in the two-wheel-drive category at the Kennards Hire Rally Australia in Coffs Harbour over the weekend.

Piloting the two-wheel-drive Citroën DS3 R3 over the three day event, Young also managed to bring the car home in 17th overall, against the world’s best drivers in the WRC, and fourth in the Australian Rally Championship behind faster turbo cars on the fast flowing stages of the iconic event.

“Honestly, it was just awesome. The Citroën was pretty much faultless all weekend and we had really good speed and I think that’s reflected in the results. And obviously for me, the other major highlight was being able to race against some of the best in the world,” said Young.

However, Young says while the event was “hugely successful” it wasn’t without its troubles. 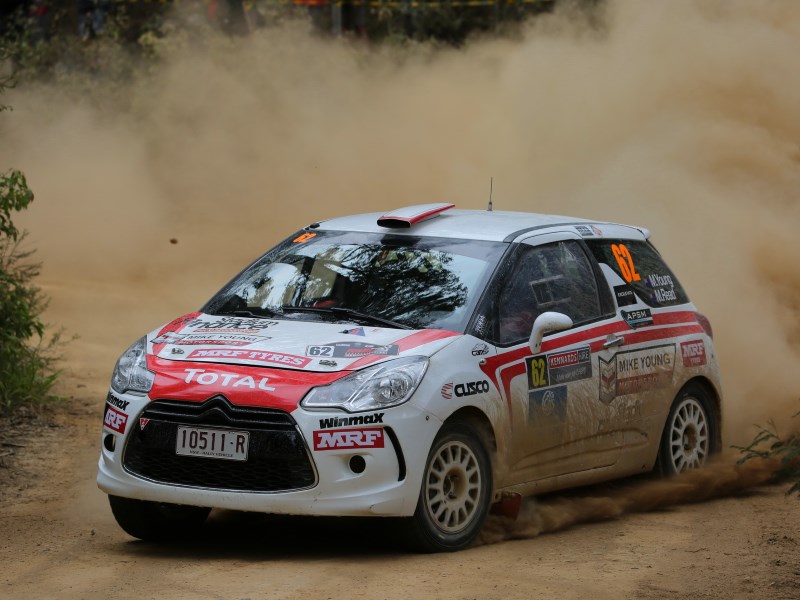 “We had a couple of minor issues but all in all it was a really great event. We got two punctures on a bridge that you couldn’t see until you were right on it and the entry had been worn away leaving a big concrete block exposed, but a lot of others had similar damage so we can’t really complain.

“Our rim ended up getting jammed because of that but Malcolm [Read] saved the day again,” explained Young. “We also had an overshoot at a junction which cost us about 30 seconds but other than that, it was all really enjoyable.”

Read, who is also a qualified mechanic, has made emergency roadside repairs to cars on a few events but Young said he is extremely grateful for his hard work at this event in particular. However, Young also wanted to thank his Rallyhire Australia team, headed by Ron Cremen, for their tireless efforts during, and before, the rally.

“I also want to say a massive thanks to Ron [Cremen] and his team for their awesome work. The Citroën was great all weekend and whenever we did have an issue, they sorted it out quickly and without any drama. They were very organised and that made all the difference, I think,” said Young.

There is no rest for the Kiwi rally duo who now head straight to India for the final round of the Asia Pacific Rally Championship (APRC) held in Chikmagalur this weekend where they will compete in a locally prepared Volkswagen supplied by Volkswagen India.

The Coffee Day India Rally officially starts on Friday at 4.30pm local time over a 2.12km super special stage around the grounds of the Amber Valley School before an additional 200 kilometers of closed special stages on Saturday and Sunday.

Fans can follow Young’s progress, and support his campaign by purchasing MYM merchandise through his Facebook page – www.facebook.com/mikeyoungmotorsport).