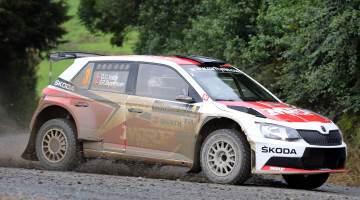 Norway’s Ole Christian Veiby and co-driver Stig Rune Skjarmoen have emerged comfortable leaders after the first full day of competition at the International Rally of Whangarei.

The opening round of the 2017 FIA Asia Pacific Rally Championship (APRC), the championship rookies returned to Northland New Zealand’s host city of Whangarei with an advantage of 33.2 seconds. Sitting in second is early event leader, current APRC champion and 2016 rally winner, Gaurav Gill from India with co-driver Stéphane Prévot.

Today’s seven special stages were held in mainly wet weather, north Whangarei. The variable conditions made for a cat-and-mouse game between Gill and Veiby, the MRF Tyres team-mates happily adjusting to the conditions in their matching ŠKODA Fabia R5 cars.

Third, debuting the Swedish based Mitsubishi Mirage team to a full APRC season is Finland’s Jari Ketomaa and Ville Mannisenmaki, 1min42sec behind Gill.

“Yes, we are very happy to be where we are,” commented Veiby. “A very nice day for us. We started with our own pace this morning in the first loop, to check in against everyone else. The afternoon we increased our pace and felt comfortable we could push a bit more. It’s not a maximum attack but I tried to take some time in the first stage after the morning service because we did that first up. The stage after that I felt I did well and it seems like it was a good time compared to Gaurav. You can go fast in these cambered corners but the changing conditions of mud and rain made it slippery in places and not others. In some places it was raining so hard the wipers couldn’t clear all the water away – so made it hard to see.”

For Gill the day came with multiple challenges, including adjusting to the style of his new-season co-driver. “It has been a long day and I think we have some issues with the front dampers and maybe the rear differential too. The front dampers mean we can’t get the tyres to work like they should so obviously I can’t go as fast as I would like to. We have had good speed and I have enjoyed the stages. Tomorrow is another long day and I have a lot to catch up.”

Departing Whangarei this morning for the day’s double-run four gravel stages, the internationals dominated the timesheets. While Gill returned after the morning’s first loop with a narrow margin of 1.7 seconds the 20-year-old Norwegian stretched his ability early in the afternoon. A traffic incident preceding the running of the afternoon’s second test forced the cars to re-route. Veiby added a further 17sec advantage on the subsequent 17km stage, winning four of the day’s seven tests.

Attrition took its toll on the chasing Kiwi field. Rangiora based brother and sister pairing of Matt and Nicole Summerfield are currently fourth overall in their Subaru STI. In fifth is the debuting Audi S1 of Auckland’s Dylan Turner and co-driver Malcolm Read.

Of the 61 cars that started Friday night’s Hella Pohe Island Super Special Stage 59 made the start of Saturday’s leg. Only 36 made it back to Whangarei.