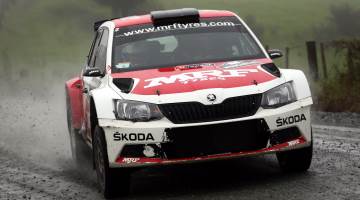 Starting today’s final leg of the two-day International Rally of Whangarei second on the road, Gaurav Gill and co-driver Stéphane Prévot took a comfortable win in the final stages of the New Zealand based event.

“We are here to win. Being professionals – we are always wanting to win although it is important to make sure we do it at the right time and right place in the championship,” said Gill at the finish.

“This has been a good rally. Very very difficult for me and while OC (Ole Christian) has been driving very well the incident today pushed him back, after we had some issues yesterday that pushed us back. So, I guess that is part and parcel of the sport. Our other most important thing is to have both cars sitting one and two for the MRF team.”

For Veiby, who started first car on the road today and with a leading margin of 33.2 seconds, it was a case of sweeping some of the loose surface gravel for his chasing competitors to benefit from.
Having won seven of the 15 high-speed special stages, Veiby’s comfortable advantage evaporated on the first repeat-run stage, the 22.53km Waipu Caves.

“A brake hose in the rear came loose and all the fluid came out so I lost brakes into a junction and barely made it, so had to finish the stage with no brakes and lost a lot of time,” explained Veiby.

Incurring a time penalty for being nine minutes late to the start of the next stage put the 20-year-old a further 1min30sec behind.

“It was not so nice; quite disappointed at the moment as I felt we had this win, but that is rallying, we win together and lose together. Second place comes with good points but as I said I thought we had this win. It has been a real pleasure to be here and huge thanks to ŠKODA, MRF and the guys in the team – they did an amazing job and we improved a lot this weekend and showed good speed. That last stage – with no pressure we just cruised, had fun and were driving for all the spectators to enjoy.” 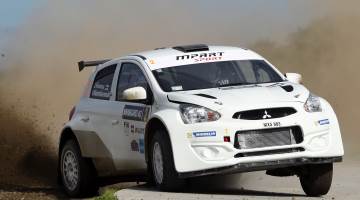 Running third overall for most of the event, Finland’s Jari Ketomaa and co-driver Ville Mannisenmaki retired after the opening stage this morning with engine failure in their Mitsubishi Mirage. Their place on the podium was taken by New Zealand brother and sister pairing of Matt and Nicole Summerfield in a Subaru STI.

“It’s been an awesome event. A big credit goes to the guys who have given me this car. It has been such an unreal weekend with so much drama going on and cars breaking down so we are very lucky to even be here today. We’re absolutely rapt with how everything has gone and it was definitely hard-fought,” said Summerfield.

Tackling the double-run loop of three tests all the competitors commented on the roller-coaster nature of the 15.39km Tangihua Road section. Japan’s Fuyuhiko Takahashi and Mitsuo Nakamura returned all smiles after their first encounter of such roads in their Subaru STI: “We had fun – the reason why I entered this rally. There was a little rain early and the last stage was very up and down – not like anything in Japan so was very different – but fun,” he said, finishing 18th overall.

Of the original 61 starters, 27 made it to the picturesque Whangarei Quayside Town Basin ceremonial finish.

The next round of six for the 2017 APRC moves to Australia. This year it will be based from capital city Canberra – 26 to 28 May.

The third round of the Brian Green Property Group New Zealand Rally Championship returns to the South Island for the Queen’s Birthday running of the Lone Star Canterbury Rally (4 June).