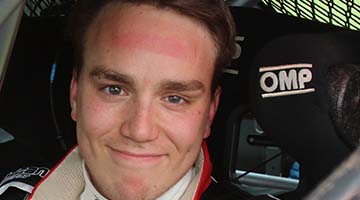 Norway’s Ole Christian Veiby and co-driver Stig Rune set fastest time of 47.2seconds in the ŠKODA Fabia R5 at this morning’s shakedown test ahead of the weekend’s 28-30 International Rally of Whangarei.

The opening round of the FIA Asia Pacific Rally Championship (APRC) Ole Vieby and Ole and Stig Rune are one of 61 teams competing across Northland New Zealand’s gravel roads in a variety of cars.

Second fastest with a time of 47.7sec was 2016 rally winner and current APRC champion Gaurav Gill from India, with new co-driver Stéphane Prévot, also in a ŠKODA Fabia R5.

The action proper starts early Saturday morning as the teams’ head north for two loops of four tests, the first starts at 7:26am with the 29.73km Riponui stage. The cars then head as far north as Northland’s Piahia before returning to Whangarei for a midday service break. Repeated in the afternoon the cars get a 45-minute service break at the end of the day before being securely parked for the night at the Toll Stadium.

Sunday’s remaining stages take the teams south, covering more familiar territory to some. The day starts with the 22.53km Waipu Caves stage, followed by the 16.46km Waiotira test and the 15.39km Tangihua stage. The cars return to Whangarei for a brief service break before repeating the loop in the early afternoon.
After the final stage the cars return for the 3pm ceremonial finish at the iconic Quayside Town Basin, adjacent to the inner harbour and city centre.

Spectators can enjoy free access to the service park (adjacent to the Toll Stadium, Port Rd side) and ceremonial finish (Quayside Town Basin). Tickets for Friday’s driver signing, opening ceremony and the Hella Super Special Stage start at $20 (under 15-aged kids are free). Spectating day passes for the rural stages cost $10 and can be pre-purchased from the Rally Headquarters (Ground Floor, Toll Stadium, 51 Okara Drive, Whangarei). Paddock parking is available at some locations for a gold coin donation.