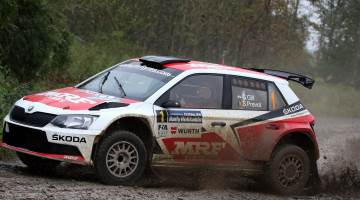 ŠKODA has announced its drivers for the 2017 FIA Asia-Pacific Rally Championship with reigning champion Gaurav Gill from India teaming up with Norwegian rookie Ole Christian Veiby.

It is Gill’s 5th season with ŠKODA and for 2017 he will have a new co-driver Stephan Prevot from Belgium. Prevot is no stranger to the APRC, having been co-driver to former Škoda APRC champion Chris Atkinson. Last year he made a one-off appearance with Gill at Japan’s Rally Hokkaido, where the pair won the event outright.

Both crews will enter the competition in ŠKODA FABIA R5’s run by the Australian MRF Race Torque team. Gill won all last years events in the APRC and had already secured the championship one round before the end of the season. In 2017, however, he’s likely to face fierce opposition from promising Norwegian rookie Ole Christian Veiby.

“The FIA Asia-Pacific Rally Championship is of major strategic significance to ŠKODA as the rallies are run in extremely important growth markets like India and China. On top of that, the demanding gravel tracks are ideal for challenging talented young drivers,” stresses ŠKODA motorsport boss Michal Hrabánek.

ŠKODA can look back on unparalleled success in the APRC. Every championship winner since 2012 has driven a ŠKODA, and current works drivers Jan Kopecký (champion 2014) and Pontus Tidemand (winner 2015) used the APRC to gain important experience on the demanding gravel tracks in Asia, Australia and New Zealand. “Ole Christian Veiby has impressed us with his powerful performance, and not just at the Rally Sweden.

I’m really looking forward to seeing how he fairs on gravel up against our old hand Gaurav Gill,” says Hrabánek.

Norwegian youngster Ole Christian Veiby is eager to make his APRC debut: “I’m so grateful to ŠKODA for putting so much faith in me and giving me this amazing opportunity.”

Veiby goes head to head with Gill on equal terms. The MRF team is running two identically prepared ŠKODA FABIA R5. Veiby proved his class with a third place at Rally Sweden and finished 5th at Rally Tour de Corse, both in category WRC 2. He is currently holding fifth position in the WRC 2 standings.