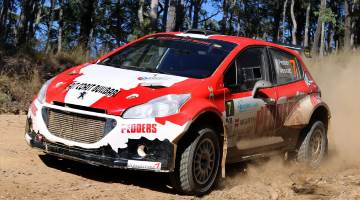 Attempts by authorities down-under to regularise efforts to free up the vehicle eligibility rules by admitting alternative designs to compete on equal terms as homologated R5 cars are only moving slowly.

With only a month before the first APRC event (the Rally of Whangarei in New Zealand, the only FIA championship rally in the country), these plans have been hindered by new national rules in NZ allowing similar cars but with different components and more powerful engines. The AP4 rules require 1.6 litre turbocharged engines and regulated transmissions, while the latest generation of NZ championship cars are virtually free formula.

Of the few eligible AP4 cars already running is a Peugeot 208 Maxi Rally imported in to Australia by Racetorque from Argentina, which is fitted with a 34mm turbo restrictor (R5 cars are limited to 32mm) while another car is in preparation and due to appear at the Rally of Queensland in Australia (APRC round 2, middle of June). Shadowing the situation all the time is the FIA’s intention to impose the newly announced R4-Kit rules on to regional championships effective start of 2017. Among the various categories of cars eligible to run under RC2 rules in AP4 cars (MSNZ & CAMS regulations – including Argentine Maxi car) and RJ Category (JAF regulations).