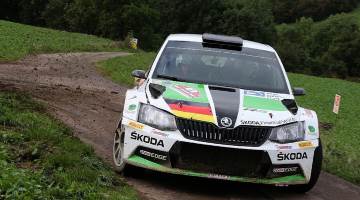 ŠKODA Motorsport will return to the International Rally of Whangarei, the opening round of the 2016 FIA Asia Pacific Rally Championship, with a two car team of ŠKODA Fabia R5 rallycars for German driver Fabian Kreim and Indian rally star Gaurav Gill. ŠKODA drivers have dominated the International Rally of Whangarei and the Asia Pacific Rally Championship (APRC) since 2012 taking victory the last four years running.

23-year-old German rally ace Fabian Kreim will make his first visit to New Zealand with the ŠKODA MRF Team. Kreim is the current driver for the ŠKODA AUTO Deutschland team in the German Rally Championship (DRM) where he won five races and finished second in the 2015 championship. Kreim also has experience in the World Rally Championship, finishing eighth in his WRC 2 class debut at last year’s Rally Germany. The 23-year-old will be partnered by experienced co-driver Frank Christian in the ŠKODA Fabia R5. 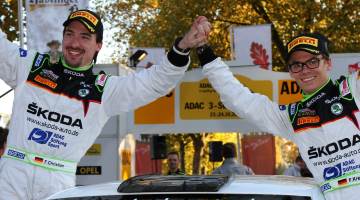 “I am absolutely delighted to be able to take on the challenge of the APRC with ŠKODA,” said Kreim. “All the rallies are obviously completely new to me, and I will have a lot to learn. However, I hope I can establish myself among the front-runners and challenge for race wins as quickly as possible at these international events.”

Indian rally driver Gaurav Gill also lines up for the ŠKODA MRF Team. The 2013 APRC champion and winner of the 2014 International Rally of Whangarei has been a regular visitor to New Zealand and is renowned for his attacking driving style. Gill will contest his first event at the wheel of the team’s new ŠKODA Fabia R5 rallycar and will be on hand to offer valuable advice to his new team-mate Fabian Kreim on the unique Whangarei conditions.

ŠKODA Motorsport Director Michal Hrabánek is excited by the teams 2016 driver lineup as it seeks to continue its unstoppable run of Driver, Co-driver and Manufacturer titles since 2012. “We want to continue our winning run in the APRC and are delighted to have a talented young driver at the wheel of the Fabia R5, in the form of Fabian Kreim. We are giving him a great chance to continue his development and gain valuable experience on gravel. The APRC is ideal for this. The rallies in the populous Asia-Pacific region, with our core market of China, are particularly important to ŠKODA. For this reason, we want to be at our best again with the experienced and successful ŠKODA MRF team.”

The International Rally of Whangarei is the opening round of the 2016 FIA Asia Pacific Rally Championship. The event commences on the evening of Friday 29th April with the rally start in central Whangarei where fans can meet the cars and stars up close before they attack two passes of the night time Super Special Stage at Pohe Island. Leg one continues on Saturday heading as far north as Kawakawa for eight special stages on the fast flowing cambered roads the rally is famous for, while Sundays final leg heads south of Whangarei for a further six stages. A total of 275 kilometres of competitive stages make-up the event.