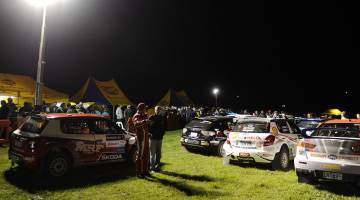 The 2016 International Rally of Whangarei is set to be a battle between experience and youth with the entry list for the event headed by former FIA Asia Pacific Rally Champion Gaurav Gill from India followed by young chargers Fabian Kreim of Germany and New Zealand’s Mike Young.

Gill will be making his ninth consecutive start at Whangarei, and starts the event as favourite having been a regular pace setter in the FIA Asia Pacific Rally Championship (APRC) in recent seasons. The 2013 APRC champion will again be partnered by Australian co-driver Glenn MacNeall.

Seeded two 23 year-old German driver Kreim will make his first visit to New Zealand’s gravel rally stages. Kreim is the current driver for the ŠKODA AUTO Deutschland team in the German Rally Championship (DRM) where he won five races and finished second in the 2015 championship. Kreim also has experience in the World Rally Championship, finishing eighth in his WRC 2 class debut at last year’s Rally Germany. The 23-year-old will be partnered by experienced co-driver Frank Christian in the ŠKODA Fabia R5.

“I am absolutely delighted to be able to take on the challenge of the APRC with ŠKODA,” said Kreim. “All the rallies are obviously completely new to me, and I will have a lot to learn. However, I hope I can establish myself among the front-runners and challenge for race wins as quickly as possible at these international events.”

“Its awesome to be back in New Zealand for my home rally, every year I look forward to Whangarei for the share joy of the roads,” commented Young. “I’m sure it will be a competitive event against the new Skoda cars, but I’m looking forward to the challenge. Hopefully its as close as last year. The plan is to have a good clean rally and the APRC Championship strong.”

The leading 2WD entry in the event for vastly experienced Australian driver Scott Pedder and co-driver Dale Moscatt. The 2014 Australian Rally champion contested the 2015 WRC2 Championship and will return to Whangarei at the wheel of an exciting Renault Clio R3.

Three Japanese teams round out the International field with Ahresty Rally Team driver Fuyuhiko Takahashi looking to build on his international rally experience driving a Subaru Impreza, Cherish Rally Team driver Makoto Kawahara returns to compete in a Mitsubishi Lancer Evo after successfully completing the 2013 Whangarei event, and Astronaut Rally Racing will campaign a Subaru Impreza for Tatsuo Koizumi who last competed in New Zealand during the late 1990’s.

Following behind the International entrants is a 45-car strong field of national teams competing in the second round of the Brian Green Property Group New Zealand Rally Championship. Kiwi WRC Star Hayden Paddon heads the entry in the Hyundai New Zealand Rally Team i20, followed by defending National Champion Ben Hunt in a Subaru Impreza.

The International Rally of Whangarei is the opening round of the 2015 FIA Asia Pacific Rally Championship. The event commences on the evening of Friday 29th April with a rally show in central Whangarei where fans can meet the cars and stars up close before they attack two passes of the night time Hella Super Special Stage at Pohe Island. Leg one continues on Saturday heading as far north as Kawakawa for eight special stages on the fast flowing cambered roads the rally is famous for, while Sundays final leg heads south of Whangarei for a further six stages. The event is based from the Pacific Ford Service Park adjacent to the Toll Stadium on Port Road where each day the teams can be seen tuning and preparing cars for the 275 kilometres of competitive stages that make-up the event.

Spectating at the rally start, finish and Quayside Town Basin service areas are free with access to rural viewing points costing just $10 per adult per day and $15 for the Ceremonial Start and spectacular Hella Pohe Island Super Special Stage on Friday evening 29th April. Children under the age of 15 are free with a paying adult and paddock parking is available at some locations for a gold coin donation.

A share of all spectator ticket revenue goes to the local community groups that help run the spectator viewing areas. A rally map is available free to download from the spectator info section of the website, or it can be collected from rally headquarters at Toll Stadium (from 27th April). It illustrates prime spectating areas with detailed timings. Spectators are reminded to follow the instructions of marshals and ensure they stand well clear of the road’s edge – and be inside the taped off viewing areas.