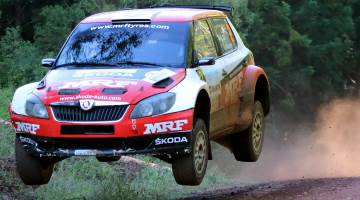 Third place in both the Würth Cup and the drivers’ championship might sound a reasonable achievement, but for former APRC champion Gaurav Gill it represented major disappointment. Certainly, it was a trying season – the Indian ace plagued by problems from the very outset.

He suffered the acute frustration of being caught and passed by his team-mate in New Zealand when his Skoda was suffering from handling problems. There was a glimmer of hope for Gill’s championship and the Würth Rally Cup chances when he won outright in New Caledonia leading from Stage 3 and holding off a challenge from his MRF Skoda team-mates on the undulating dirt roads of this picturesque Pacific Island.

However his hopes were dashed at the next event, in Queensland, when — after leading for most of the rally — he was forced to retire not far from the finish with a blown engine. Then, in Malaysia, starting first on the road put him at an immediate disadvantage, as long grass repeatedly blocked the Skoda’s radiators, forcing him to pull-over three times on one stage alone. Second was an OK result considering the circumstances. 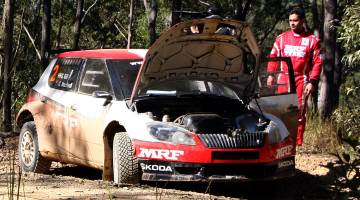 Gill arrived in Japan hungry for victory, but unfortunately luck was still against him: On the second stage of the event his Skoda suffered a broken rear driveshaft. With three-wheel drive the Skoda is totally unpredictable and after an off course excursion there was no other option but to retire. From that moment on Gill’s and co-driver Glenn Macneall’s season was over. Any chance of challenging for the championship gone.

At the next event, in China, Gill was over his disappointment and highly motivated to finish the championship on a high. “I really haven’t had a good year this year, so I’m really looking forward to having a good rally” he said at the start.

In the mountains on Stage 3, San Men Yuan, everything was looking good for Gill, he held a 19-second advantage and was driving with confidence, despite the clouds that made visibility difficult. But then his bad luck returned – a puncture turning his lead into a 17-second deficit to his teammate. 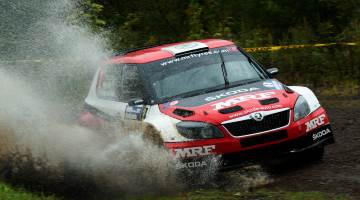 On the next test, he bounced back, on attack, setting a blinding pace. Once again he was fastest on the stage split times – 11 seconds up after just four and half minutes, but once again it all went wrong for Gill cutting a corner that pitched the Skoda into a multiple roll. Gill was unhurt but the stage stopped when it was discovered Macneall had a broken collar-bone. Thankfully at the finish ceremony the following day, Macneall his arm in a sling, was well enough to accept the prize-money for third place in the Würth Cup.

Gill did finish his season on a high with overall victory on the APRC India Rally, although he was entered in the National Rally not the international Asia Cup category.

In 2016 Gill is expected to return to the APRC driving an MRF Skoda R5.