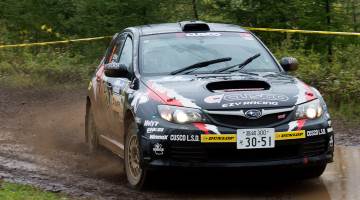 At 22 years-old Mike Young might still be considered a Junior driver, but 2015 was the New Zealanders fourth full year in the Asia Pacific Rally Championship (APRC) and after winning a number of FIA titles in two-wheel drive cars, his Japanese based Cusco EZY Racing team decided it was time to promote him to a Group N turbo charged, four-wheel drive Subaru.

Young revelled in the upgrade, quickly on the pace at his home event in New Zealand battling for second with Gill, right up until the last stage and the last corner when a slight off course excursion was enough to drop Young back to third place by a mere 1.9 seconds.

Nevertheless a podium place was a great start to his championship.

Click here to watch Mike Young in action during the 2015 APRC season.

“Third’s an extreme bonus for us, first time in a four-wheel drive and still trying to learn the car I would have been happy for fourth, so third and get to spray some champagne is pretty awesome for us”, Young said at the finish. 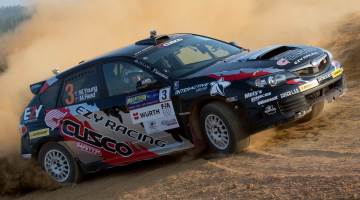 Skipping New Caledonia, Young’s next event was in Australia and again he out paced his closest opposition to settle into third behind the two MRF Skoda’s. When Gill’s engine let go near the end of the rally, Young was there to slot into second. A great result, further consolidating his position in the championship.

During the mid-year break Young was invited to join the Elite Motor-Sports Academy in New Zealand along with his co-driver Malcolm Read. After an intensive 7 days of rigorous physical, mental and educational training Young came out tops ahead of the other eight contestants.

Following that week of physical training that included hydration and extreme heat testing, Young was perfectly setup for the Malaysian Rally where in-car temperatures are often over 50 degrees celsius and where the Oil Palm plantation stages are narrow and rough. The team got off to a great start in stage one and things were looking good early on; second fastest at the first split, although maybe too fast.

After a long straight Young under-steered off at a right-hander destroying the front left suspension against a steep bank. The Cusco EZY Racing Subaru limped on for a few kilometres, but when Young and Read stopped to attempt repairs they found the jack doesn’t work. It was game over for Leg one, however the team did an amazing job to get the car fixed and running for day two where Young picked up some valuable championship points. 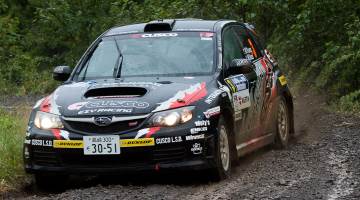 Next up was Cusco’s home event Japan where it was time for redemption. After stage two, Young sat in second place and was subsequently penalised four minutes for leaving refuel late when the car wouldn’t start due to a faulty fuse; possibly a legacy of the Malaysia crash. Young made up for the time loss with a determined drive in atrocious weather conditions fighting his way back to second, winning a stage along the way, and clinching more valuable points.

China was a real test, even on good days with its multiple surfaces. This year the rain added a new challenge, although it turned out to be the least of Young’s problems. The Kiwi duo were third fastest on Friday’s super-special, but they quickly discovered the Cusco EZY Racing Subaru had no power-steering on the San Men Yuan mountain stage, one of the tightest and highest in the championship with 40 uphill hairpins.

Young continued to wrestle his Cusco EZY Racing Subaru through the afternoon stages, including a repeat of San Men Yuan, only to roll on the final test of the day after a combination of exhaustion and heavy steering caught the Kiwi out.

With the help of spectators the pair soon had the Cusco EZY Racing Subaru back on its wheels and although there was some ominous noises coming from the car, it somehow made it back to the service park inside the 30 minute late penalty allowance. With just a three-man service crew, it was a frantic 45 minutes to repair the damage and change the power-steering pump.

With more than half the rally still to run the following day, and still with no power-steering, Young and Read battled through to the finish; one of only three competitors to do so. It was a real team result and the reward was winning the FIA Production Cup title and second overall in the drivers championship. At final service Young said, “I’ve been up four mountains this weekend with no power-steering, even on our roof at one point thinking it was all over, but we never gave up so really happy to make the finish”.

Plans are now underway for Young to compete in the 2016 APRC Championship with the first event kicking off at his local event, New Zealand, in April. To stay up to date with the team over the off-season, visit their Facebook page: https://www.facebook.com/MikeYoungMotorsport