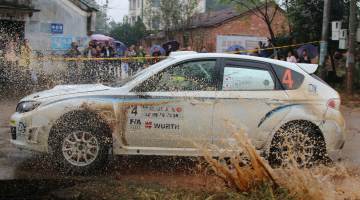 At close of entries for India Rally the final round of the FIA Asia Cup, no APRC competitors had entered the event therefore the Asia Cup winner for 2015 is current points leader Japanese driver Hitoshi Takayama and co-driver Hideki Takeyabu.

The only registered driver that could have challenged Takayama for the Asia Cup is New Zealander Mike Young however the Cusco EZY Racing team have elected not to compete in India handing Takayama the trophy.

There’s no doubt Takayama is a deserved winner having finished all events and won the majority of stages in the three Asia Cup events contested in 2015. Add to that it was Takayama’s first time rallying internationally, not an easy task on events like Malaysia and China where the terrain, climate and cultures are vastly different to his native in Japan.

On hearing the news Takayama said ” I feel very happy to get the ASIA cup title. But it is only by the good luck and our team efforts, not by my power. So I feel that I should try harder to be stronger rally driver. China was my favourite event , because I could win the (Asia Cup) rally and it was the very first time of winning in my rally career.” 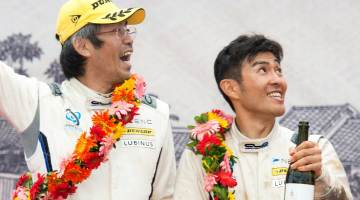 Takayama was up against some formidable competition for the Cup including former APRC Champion Gaurav Gill from India who won the category in Malaysia, Fan Fan from China and Sri Lankan driver Dinesh Deheragoda.

Young recovered his championship hopes by winning Asia Cup in Japan, then survived China Rally after driving the event with no power-steering and a roll-over to finish second to Takayama. Young is registered to compete in India however for a variety of reasons the New Zealander and his Cusco EZY Racing team have elected not to contest the event. 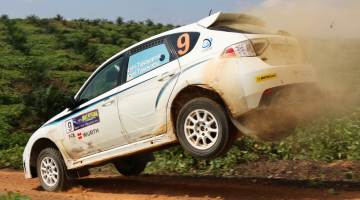 “We were looking forward to competing in India, however after China Rally there was some serious damage to the car from our roll-over and then when we heard no other APRC competitors were going. While we still had to finish the event (to score enough points), it would have been a rather empty victory to have secured the cup in that way’, said driver Mike Young. “Sure it hands the Asia Cup to Takayama san, but he thoroughly deserves the award – he drove really well and finished all three events. Of course I look forward to a big fight with him next year!”.

Young and Takayama are both planning a full APRC campaign in 2016 in Group N Subaru’s– it will be a good battle to watch through the season.