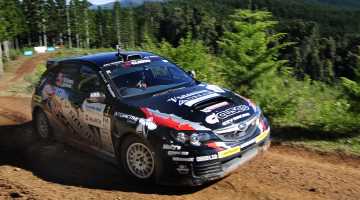 The fourth round of the Asia Pacific Rally Championship (APRC), the International Rally of Queensland, is set to get away tomorrow after torrential downpours earlier in the week causing road conditions to dramatically change and posing an added challenge to drivers.

Held around Australia’s Sunshine Coast, the event takes in 18 special stages throughout the Imbil forest, but the recent rain doubled with tree lined roads has left the stages incredibly slippery and sometimes unpredictable.

Current APRC Championship leader, Pontus Tidemand (Sweden), says: “It will be tricky… To be honest, I like the roads, it’s quite fast and flowing. And for sure it’s been raining so it’s a little bit muddy and little bit tricky at this point but it’s the same for everyone.”

While Tidemand and co-driver Emil Axelsson will “focus on their own thing,” in their Team MRF Skoda Fabia S2000, their team-mate and 2013 APRC Champion Gaurav Gill has a different approach.

“Obviously the plan is to attack and to try and get maximum points,” says Gill, “we went testing the other day and the roads were quite slippery and wet so we made some changes to the car but we don’t know how it’s going to be tomorrow. It will be quite exciting.” 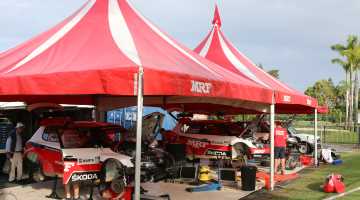 In only his second ever event in a four-wheel-drive car, New Zealander Michael Young and co-driver Malcolm Read will also be looking for a solid result in their Cusco Racing Subaru Impreza supported by EZY Racing.

“The stages are really muddy. There are quite a few really tricky places in the downhill but luckily we’re in the four-wheel-drive now. It would certainly be an extreme challenge in the two-wheel-drive but I think by the end of Saturday the stages will dry out a bit so that will help,” explained Young.

Subhan Aksa also returns to the APRC in a Mitsubishi Lancer Evolution in his second attempt at Rally Queensland, after missing out the second round held in New Caledonia.

Aksa says: “We had to write new notes with Nicola so it’s basically a brand new rally for us. Looking at the recce, it was still quite muddy, and it would look like our rally back home in Indonesia; but it looks like it’s drying up.”

Jean-Louis Leyraud from New Caledonia also returns to the championship in his Skoda Fabia S2000 and says: “This is a good event but difficult and very challenging. The rhythm is changing all the time; you can go very fast on a wide road, then into the forest which is very narrow with some slippery parts. It’s quite interesting but I enjoy it.” 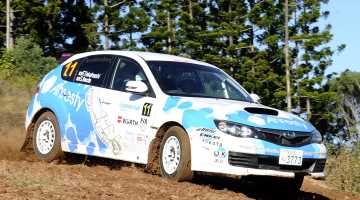 Atsushi Masumura of Japan returns in his Mitsubishi Evolution, alongside compatriot Fuyuhiko Takahashi in his Subaru Impreza.

A strong local field complements the APRC drivers, including former Pacific Cup runner-up Mark Pedder, in a brand new Argentinian-built Peugeot 208 Maxi and Adrian Coppin in a Citroen DS3. They both join two-time Australian Rally Champion, Eli Evans, who is also behind the wheel of a Citroen DS3.

The International Rally of Queensland is based out of Caloundra, on the Sunshine Coast north of Brisbane. The start ceremony took place in Caloundra town centre earlier tonight before teams head to the forest for 18 special stages. Saturday and Sunday sees the event move north to Imbil forest, approximately one hour from Caloundra.