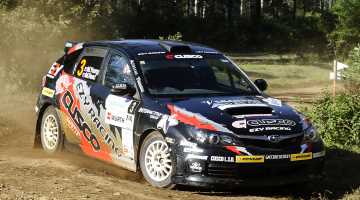 Gaurav Gill of India has emerged as the rally leader in slippery conditions after completing 10 special stages on a sunny day one at the International Rally of Queensland, the third round of the Asia Pacific Rally Championship (APRC) held this weekend around Sunshine Coast.

Gill, who last won this rally in 2010, took the lead early in his Team MRF Skoda Fabia S2000 and kept it throughout the day despite having a spin in the morning loop to maintain a 4.6 second advantage.

Gill said: “Our day was okay. It was good but I made two mistakes which I’m very upset about. But we’re here all safe and sound, and I’m not taking any risks.

“We will change the setup of the car as there is absolutely no traction at the back of the car. We’ll put some more lock and some more grip in there [the differential]. I’m just keeping it on the road and smooth and bringing the car back. Pontus is slowly chipping time away from us but I know our speed and I know his speed.”

Meanwhile, his Skoda team-mate Pontus Tidemand (Sweden) maintained second position, even after having a puncture in the early stages and losing valuable time.

Both Team MRF Skoda drivers remain cautiously optimistic about their chances of taking the Rally Queensland win, but both maintain team points are important and they won’t take any major risks. 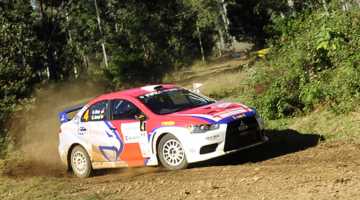 “Tomorrow we take no big risks you know. It is important to get to the finish for the team.”

New Zealander Michael Young currently rounds out the podium in third, two and a half minutes down on the leaders in his Cusco / EZY Racing Subaru Impreza, after having a clean and consistent run in his second event in the four-wheel-drive car.

Young said: “This afternoon was a lot better. The setup changes we made at lunchtime seemed to work a lot better and it was just amazing. Straight away the car felt ten times better and I was able to push on with a bit more confidence.

“Tomorrow I just want to keep our position and stay in third. But Subhan is pushing a bit harder I think so we’ll have to manage that as best we can.”

On his return to the APRC Subhan Aksa of Indonesia drove his Mitsubishi Evolution to fourth, approximately one minute behind Young, but is vowing to fight back tomorrow after fuel issues with his car later today.

“I struggled to get into the rhythm today and on the last one [special stage] we had some problems. The fuel pressure was low and the engine kept cutting off,” explained Aksa.

Leading the Australian charge is Eli Evans in his two-wheel-drive Citroen DS3, who now sits fifth in international event despite encountering an unforeseen problem with the new car and water splashes.

“We drove hard this morning and we were able to keep in touch with the APRC guys Mike Young and Subhan Aksa in the Subaru and Lancer. But as they’ve got their groove on, they’ve been able to drive away so I can’t keep up with them now ,” said Evans.

New Caledonian veteran, Jean-Louis Leyraud, pushed hard early in the day but pulled back later in the day to finish the day in sixth in his Skoda Fabia S2000. 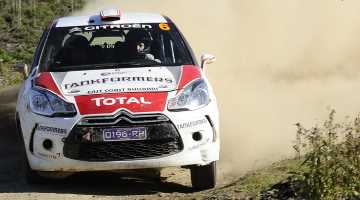 Day two of the International Rally of Queensland begins again tomorrow morning at 07.38am, with eight stages to run before the finish in Imbil.