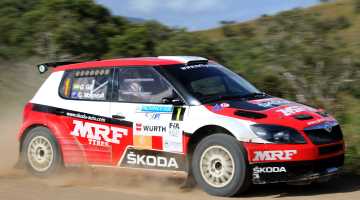 The Team MRF pairing of Gaurav Gill and Pountus Tidemand will be fighting for victory in this weekend’s Rally of Queensland.

After the opening two rounds in New Zealand and New Caledonia, Sweden’s Pontus Tidemand leads his Indian team-mate, Gaurav Gill, with both hoping to add victory on the Sunshine Coast to their resumes.

Both drivers have competed internationally recently, but in vastly different machinery. Tidemand and co-driver, Emil Axelsson, debuted Skoda’s new Fabia R5 in the Rally of Portugal and finished on the podium in the WRC2 category, while Gill won the second round of the Indian Rally Championship driving a diesel-powered SUV.

This will be Tidemand’s first visit to Queensland, and it’s another new challenge he’s looking forward to.

“Just like the two previous APRC rallies, everything is new to me this time too, even though I’m starting to get used to being in this part of the world – and the time difference,” he said.

“So far we have had great results and it obviously feels good to top the leaderboard, but we are almost half way into the season and the competition gets harder. We expect to be chased this weekend so we have to focus on the task, do our best and not bother too much about what is happening around us.

“I have heard a lot of good things about Rally Queensland and the enthusiastic fans in the area, so this is guaranteed to be fun.” 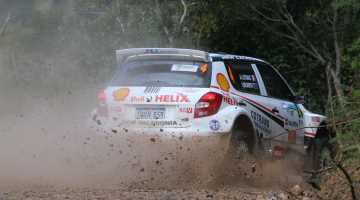 Although he is yet to win in Queensland, Gill’s experience of the event could prove decisive in what is expected to be a great battle with his team-mate. He’s coming off victory in New Caledonia, and will be aiming to take the championship lead with a win this weekend.

Gill’s Race Torque prepared Team MRF Skoda Fabia S2000 will have a new engine fitted for this rally, while both cars will run fresh gearboxes. The team will also run a third car, for New Caledonian driver Jean-Louis Leyraud.

“We’ve had a great start to the year, and with previous success in the Rally of Queensland, both Pontus and Gaurav will be confident.

“Pontus has already done over 3000km of rallying this year, which is more than Gaurav will do for the entire season, so that should give him an advantage. But it’s also his first time in Queensland.
“Gill’s victory last weekend will be good for his confidence, but stepping out of a diesel SUV into a Super 2000 car will take some getting used to.

“Jean-Louis was also fast on his home event, and he’s comfortable and happy in the car, so we’re expecting good things from him as well.

“If we can have a consistent run over the weekend and get all three cars to the finish, we’ll be happy.”

Australian driver Mark Pedder will also contest the APRC component of the rally in a 1.6-litre turbo Peugeot 208 Maxi, as will Eli Evans, Tony Sullens and Adrian Coppin, all in Citroen DS3 R3s.

Competition in the International Rally of Queensland starts in the Sunshine Coast hinterland town of Kenilworth at 7.30am on Saturday. Teams and enthusiasts staying in Imbil will be entertained at a free street party on Saturday night.

The rally finishes with podium presentations at the competitors’ service park in the Mary Valley Showgrounds in Imbil on Sunday afternoon, after 18 stages totalling almost 230 kilometres of forest racing.