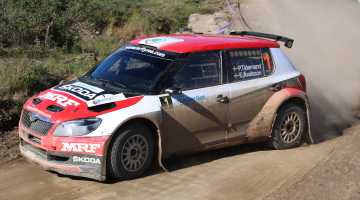 Team MRF’s Pontus Tidemand has increased his lead in the 2015 Asia-Pacific Rally Championship after a convincing victory in the International Rally of Queensland.

The win puts Tidemand and co-driver, Emil Axelsson, 34 points clear at the head of the championship table, while Team MRF and Skoda continue to dominate the Manufacturers and Teams Cup competitions.

Despite this being his first visit to Australia, Tidemand quickly got used to the slippery and technical Sunshine Coast stages, although he initially trailed his team-mate after a puncture.

After 12 of the event’s 18 stages, Tidemand and Gill both had six stage wins, but luck wasn’t on the Indian’s side and he retired on stage 16.

It was Tidemand’s second win from three starts in this year’s APRC, and sets him up nicely as the championship moves into its second half. The win also saw Tidemand wrap up the three-event Pacific Cup, 27 points clear of the similar Skoda of Jean-Louis Leyraud. 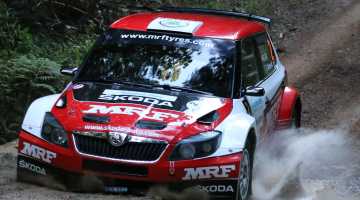 “It was a good fight and it’s a shame it ended in retirement for Gill. But for sure it’s good for the championship and I have learned a lot on this rally, because it’s been a new surface so for me. It’s been really good,” Tidemand said.

“The team has done a fantastic job with the car and it has worked really well. Gaurav is also driving really well. It’s been a great event and I have enjoyed being here in Australia.”

Gill, along with Australian co-driver Glenn Macneall, was disappointed with his retirement, but has vowed to fight back at the next round in Malaysia.

“It was a great weekend. Unfortunately we had to retire in this way, but I am glad that I have learned a lot from fighting this weekend with Pontus,” he said.

“I thank him for the battle because it is really good to drive on the limit on every corner, on every stage through the weekend. That is a great feeling.”

Team MRF boss, Lane Heenan, was happy to take another rally win, but was left ruing Gill’s day two retirement, and the chance of the team’s third 1-2 finish in succession.

“Pontus has once again showed that he is one of the most promising rally drivers in the world,” Heenan said.

“He is doing so much rallying around the world at the moment that new events don’t seem to bother him. He’s quickly on the pace and both he and Emil have gelled really well with the team right from the first rally in New Zealand.

“Of course it’s disappointing to see Gill drop out on the final day, as for a long time it appeared as though he was set for victory.

“But the Queensland stages are traditionally tough and getting to the finish is easier said than done.

“It was another great result for Jean-Louis as well, coming on top of his brilliant drive on home soil in the last event. His fifth place sees him retain third in the championship

“We’ll have both Team MRF cars on the pace again in Malaysia, and I’m confident that we can again push for another 1-2 finish.”

The next rally on the APRC calendar is the Malaysian Rally, held from August 14-16, near Johor Bahru in the south of the country.

The Malaysian Rally is renowned for being an extreme challenge for man and machine due to intense heat and humidity, and is often known as the rally of attrition.