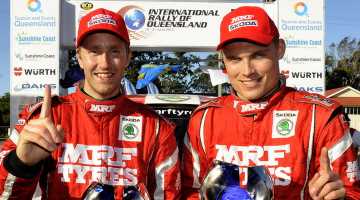 After a close weekend-long battle, Pontus Tidemand of Sweden has emerged victorious at the International Rally of Queensland, the third round of the Asia Pacific Rally Championship (APRC) held this weekend around Australia’s Sunshine Coast.

Tidemand says: “It was a good fight and it’s a shame it ended in retirement [for Gill]. But for sure it’s good for the championship and I have learned a lot on this rally, because it’s been a new surface… so for me, it’s been really good. 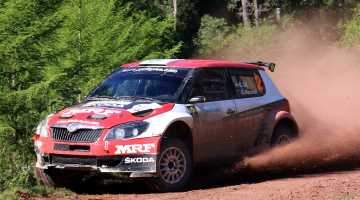 “Also the team has done a fantastic job with the car. It has worked really well. Gaurav [Gill] is driving really well, it’s been a great event, and I have enjoyed being here in Australia.”

New Zealander Michael Young, in a Cusco / EZY Racing Subaru Impreza, finished in second after another clean and consistent run, although he was not without his own troubles after hitting a bird at 180 kilometres per hour and puncturing late in the day.

“The weekend just went awesome for us. There were a few little hiccups along the way but the Cusco car was awesome and I’m really happy to have the extra support from EZY Racing this weekend,” says Young. 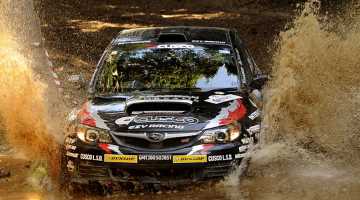 “But in the afternoon we had a puncture, just near the end. Luckily we only lost 20 seconds or so and we just drove through as it was only 2km from the end. It’s just an awesome feeling, especially standing next to Pontus on the podium.”

Subhan Aksa, of Indonesia, rounded out the podium in third despite having Australia driver Eli Evans chasing him throughout the day.

Aksa says: “It is very unfortunate for Gaurav [Gill] stopping a few stages before the end. It was very challenging event for us right from day one but we are very happy to be on the podium.

“Our next rally will be in Malaysia, close to our home country. The type of road will be very similar to what we have back home and hopefully we will have some advantage there.”

A true stand-out performance of the rally was Australian Eli Evans, who piloted his two-wheel-drive Citroen DS3 to an impressive fifth overall finish, often swapping times with more powerful four-wheel-drive cars. Interestingly, Evans also won the local Australian Rally Championship round by over six minutes in the process. 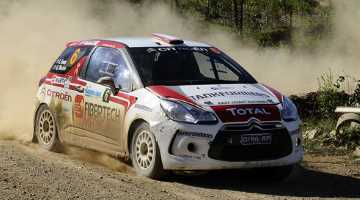 “We’ve had a great weekend and it was only because of Gaurav’s [Gill] misfortune we got put into fourth. We couldn’t catch Subhan [Aksa] in his [Mitsubishi] Evo 10 but we drove the Citroen as fast as we could, and we had an absolute ball,” explained Evans.

Gill, while clearly disappointed as his retirement after leading the rally for so long, congratulated his team-mate and vows to fight back at the next APRC round in Malaysia.

“It was a great weekend. Unfortunately we had to retire in this way but I am glad that I have learned a lot fighting this weekend with Pontus [Tidemand]. I thank him for the battle because it is really good to drive on the limit on every corner, on every stage through the weekend. That is a great feeling.”

Just before the midday service after stage 12 Gill and Tidemand sat equal on stage wins, taking six each, before Tidemand slowly slipped away as Gill punctured in stage 15 followed by his subsequent retirement.

The next rally on the APRC calendar is the Malaysian Rally, held on the 14 to 16 of August, near Johor Bahru in southern Malaysia. The Malaysian Rally is renowned for being an extreme challenge for man and machine due to intense heat and humidity, and is often known as the rally of attrition.