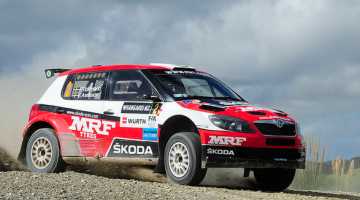 Team MRF have made the perfect start to their Asia-Pacific Rally Championship (APRC) campaign, finishing first and second in the season opener, the International Rally of Whangarei.

Shooting for a fourth consecutive APRC title, Team MRF debutant, Sweden’s Pontus Tidemand, dominated the event in his Skoda Fabia Super 2000, while his team-mate and the 2013 APRC winner, Gaurav Gill, finished second to kick-start his season.

A former Swedish Rally Champion and one of the world’s most talented young drivers, Tidemand was untroubled as he and co-driver Emil Axelsson drove to a victory of nearly six minutes, despite this being their first visit to New Zealand.

“It is just fantastic and for the team it is first and second, so it couldn’t be a better start,” Tidemand said.

“And early in the season it’s always good to have a good start because it makes the season much easier to win. New Caledonia (round two) will be completely new for me like this one, so it will be a good experience.

“I’ve enjoyed Rally Whangarei so much and my co-driver Emil has done a fantastic job, the team was great and the car was working really well… I hope I can come back here to drive again.”

Such was Tidemand’s dominance, he won 15 of the rally’s 16 closed road stages to the north of Auckland, on New Zealand’s north island. 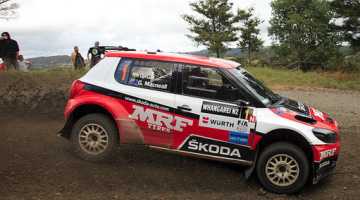 Driving the second Race Torque-prepared Skoda Fabia S2000, India’s Gaurav Gill didn’t have the trouble free event enjoyed by his younger team-mate, but still managed to claw his way back through the field.

A last day charge by he and his Australian co-driver, Glenn Macneall, saw them move into second place on the very last stage. They eventually finished just 1.9 seconds in front of New Zealander Mike Young, after nearly 300km of stages.

“We had a great battle with Mike at the end. He drove really well considering it was his first time in the four-wheel-drive car, and of course the New Zealand roads are a real pleasure to drive on,” Gill said.

“We had some dramas but we got it sorted today and I was up to speed. Although in the last stage I was a little nervous because we had a lot of rain and I had no clue whether he had some rain or not, so I pushed a little harder.” 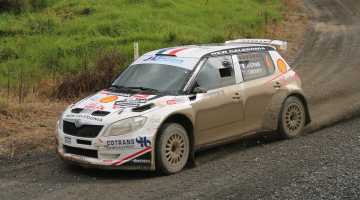 Through it all, the MRF-equipped Skodas were the class of the field, and have started their 2015 campaign in perfect style.

“The drive from Pontus was truly incredible. On his first visit to New Zealand, and his first time in our team, he put in a fast and mature drive that is going to make him hard to beat for the remainder of the championship.

“Gaurav had a few dramas, including a broken driveshaft, but his fightback over the final few stages on the last day proved that he has lost none of his speed and that he’ll be right up there as the year progresses.”

Weather played a crucial role at the International Rally of Whangarei, with conditions changing several times throughout the weekend, from torrential downpours to beautifully clear and sunny skies.

The second round of the APRC will be held in New Caledonia from May 15 to 17, covering 245km of the mid-Pacific islands gravel roads.