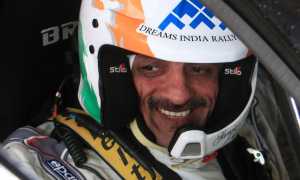 Takale, based in the city of Pune in Maharashtra, enjoyed considerable success last year by winning the APRC’s Production Cup but has been struggling in 2014 with a multitude of small, yet costly problems.

The APRC season started in New Zealand during April where Takale joined by co-driver, Sean Gregory, debuted with a new team and new car on the fast, flowing roads in Whangarei. At the time, Takale said: “The roads in Whangarei are very fast. The white gravel is also very challenging and I hope to get used to my new car without too much trouble but there are so many things to learn. The handbrake is one example; I’m used to that sitting near the gear lever but in the new Cusco Subaru Impreza it is at eye level, so that makes things a bit difficult.”

The fast roads in New Zealand are in complete contrast to the narrower, slower roads typical of the Asian events where Takale started his rallying career. He eventually finished the International Rally of Whangarei before moving to New Caledonia where he experienced a did-not-finish (DNF) due to mechanical issues with his Cusco Racing Subaru Impreza.

“I learnt a lot about pace-notes thanks to Glenn [Macneall] who made it very clear, and Alistair, and also the line selection where I should be on the road, and I think those things will really help me,” explained Takale. 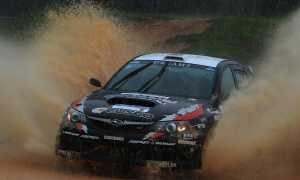 After Australia the APRC Championship moved back to the Asian events where Takale says he felt more at ease; especially at the Malaysian Rally which Takale considers as his home event.

Takale said: “I love this rally [Malaysia], for me it’s almost like coming home. I had my first rally experience here in Malaysia so it always holds a special place in my heart. The climate is also like home [India], and so are the roads actually, but if the rain comes, that’s when it becomes really tricky for me as I’m not so familiar with that.”

Unfortunately, rain hit the region prior to the start making the already tricky roads in Malaysia, even tougher. Many competitors came unstuck with damage forcing retirements or costing valuable time, and despite a roll-over which cost Takale and Gregory some time, the duo managed to complete the rally and scored valuable championship points.

The unfortunate roll over wasn’t the only drama for Takale in Malaysia, as damage caused by the roll over forced his door shut, meaning he couldn’t get out of the car until the lunch-time service two hours later, which in turn caused Takale to suffer from dehydration.

More drama unfolded when the local constabulary (or Police) pulled Takale over for a standard vehicle check, then to make matters worse the team got lost touring back to service, and yet, the Cusco Racing pair still made the finish taking in a solid points haul for the 2014 Asia Cup.

The 2014 Malaysian Rally was also the first round of the Asia Cup; a small mini-APRC championship contested over three events, which Takale hopes to score a solid placing in. Following Malaysia, Takale sits fifth in the standings, only 10 points behind second-place getter and former Asia Cup champion, Yuya Sumiyama, of Japan.

The next round on Takale’s calendar is Rally Hokkaido, held in Japan on the 27 and 28 of September, where he will be chasing down a podium place in the Asia Cup to increase his title chances.