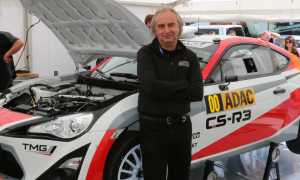 It may be a somewhat tenuous link, but the Asia Pacific Rally Championship and the new TMG GT86 CS-R3 are connected by one of the senior engineers working on the project. Fredy Nowak was an engineer on the 2003 & 2004 APRC working with German driver Armin Kremer who went on to claim the APRC Drivers title for MRF Tyres that year. “I have good memories of APRC, lots of different countries and very challenging” said Nowak when I met him at the recent WRC Rally Germany.

TMG also created the Toyota Yaris R1A, a car similar to the one Mike Young drove on the 2013 APRC winning 4 titles including the 2WD manufacturers for Toyota. When introduced to Young, who was also at WRC Germany and asked did he know about his achievements Nowak replied “Of course I know Michael, the Yaris was my project, I followed every event!” The Yaris development has now moved up several levels with TMG using the model to create a WRC car. “There are a lot of rumours about the car, about Toyota coming back into WRC but actually this is completely a TMG funded project, no funding comes from Toyota” said Nowak. 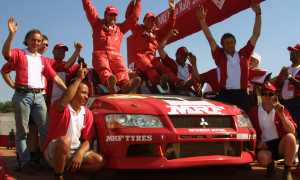 WRC Rally Germany was the launch of the new Toyota GT86 CS-R3, a prototype driven as a road-opening zero car by former female world rally champion Isolde Holderied. The priority throughout the 1500km rally was to record as many kilometres as possible to evaluate initial specifications and find improvements before the finished CS-R3 kit is delivered to customers in early 2015. “We’re very happy with the car, it is very special and created a lot of interest from drivers who want to return to a powerful rear-wheel drive car”.

When asked will we see one on the APRC ? “The homologation process is not likely to be completed until April 1, 2015 after that who knows. The kits will be available all over the world through TMG distributors. It would be great if some-one did run one on APRC, it could be an excuse for me to return!!” said Nowak.