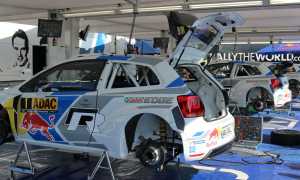 It’s been a long time since I’ve attended a WRC event in Europe. And while WRC Australia will be closer to home and only a few weeks away, the opportunity to see WRC Rally Germany had much more appeal. Not only because it was a week after APRC Malaysian Rally and cheap to add the extra air-ticket, it was the appeal of the fantastic scenery in the Moselle valley with its steep hillside vineyards and most all, this event has a great mixture of classes and categories.

Seventeen WRC cars, a similar number of R5’s and best of all a big range of supporting classes including the Junior R3 Citroens, the D-Mack Ford Fiesta series, the Opel Adam R2 series and at this event the debut of the TMG GT-86 R3 running as a zero car, all added up to making the German event a must see.

And coming from the APRC Malaysian Rally service-park in Johor to the WRC service park in Trier has to be seen to be believed, its mind boggling! 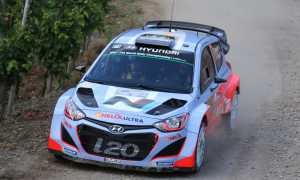 The Hyundai garage alone is bigger than many dealerships around the world, a fully erected three storey building that is transported around Europe on five huge trucks. Volkswagen has several buildings, two hospitality areas, a large display site – taking up an area equivalent to the whole APRC service park! Add Citroen and Ford and all the support classes and WRC service park takes up many many hectares.

And while I wandered around goggle eyed, it was hard not to pick up quite a sense of negativity around the service park. Looking at it, it was hard to understand why, but certainly there were plenty of grumbles from teams and media about the lack of promotion of the WRC both from the promoters and the organizers. This is hard to put in prospective, but certainly when looking at the huge investment from the manufacturers like Hyundai and Volkswagen maybe they have a point….but who’s going to fix it, who is going to change it?

Live TV is top of the agenda, but for rallying this is no easy fix. The changes proposed for WRC 2015 supposedly are going to put all the emphasis on the final day, the final stage that will be broadcast live and where the whole event will be won or lost. In Germany the final stage had a sense of history about to be made, with Hyundai looking at not only their first win, but a first AND second to really cap it off. 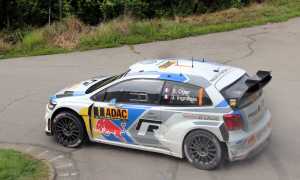 Was the final stage presentation exciting? Plenty of helicopter coverage, live in-car, but exciting??…. No. Just more of the same – one car on the track, racing itself, racing the clock……that’s what rallying is for goodness sake!

Admittedly the commentary was all in German and the commentator really didn’t seem to be getting that excited except when Boffier crashed out for a second time – effectively ending his professional debut in the worst possible way. But I really can’t see how promoting one stage is going to change the average TV punters perspective of rallying, it just ain’t like that!!

Personally I think WRC TV should stop worrying about live TV, a good half-hour daily package is way more cost-effective. Spend the money on getting the action online, as quickly as possible. That’s where people are watching and keeping track. OnLine TV and rally radio is popular, as is Twitter, Facebook and all the other social media outlets such as iRally. They are all relatively cheap….compared to live TV.

So how does WRC compare to APRC? It doesn’t and in fact to be honest it is somewhat embarrassing to think the whole total APRC service-park would take up the same area as the Volkswagen area in the WRC service-park. Twelve international competitors against 120 simply doesn’t compare.

But let’s not forget that from our tiny championship, we have the biggest potential TV audience of any motorsport series in the world and that is something that’s hard to imagine or even grasp.

APRC TV programming is available in China, India and Indonesia – three of the most populated countries in the world with a total and potential TV audience of 2.5 billion people. Skoda,( aka Volkswagen) and Würth recognise those numbers and that’s why they are in the APRC championship. 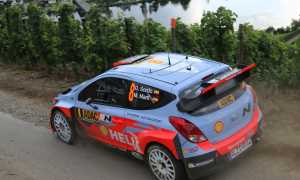 Getting to that 2.5 billion people isn’t easy and we’d be dreaming to claim we even get to 5% of them, but APRC TV programming is available in those countries (WRC is not) and we work closely with and supply our footage to Chinese production companies who produce rally coverage for China’s Government owned CCTV-5 and Guangdong TV – reaching massive audiences across China with just those two TV networks. Then there’s the media coverage on websites like Sports.QQ.com and Sina.com – never heard of them? Two huge sports websites in China with millions of visitors daily.

Add our APRC TV coverage on DD Sports India, STAR Sports India and Indonesia and suddenly those numbers start to become realistic. What is 5% of 2.5 billion?? 125 million!!! And let’s be conservative at 3% (easily achievable when you add our TV audiences in Europe, USA, Australia and South East Asia) that’s 75 million viewers per event, all achieved with a small team of 5 very dedicated professionals.

Look at the investment in the WRC service-park and compare it to APRC and suddenly you to understand the grumbles. ROI or return on investment is what bean counters look at… APRC stacks up easily when considering the TV and media audience. Does WRC?