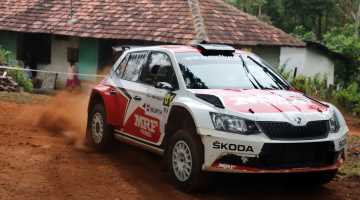 Gaurav Gill of Team MRF is poised for an unprecedented clean sweep of the FIA Asia Pacific Rally Championship as he surged to a commanding and unassailable lead at the end of Leg-1 in the Coffee Day India Rally here today.

Gill (co-driver Glenn Macneall), who took rally driving to a level not seen before in India, ended the day with a handsome lead of seven minutes, 33.6 seconds over second-placed Michael Young (Malcolm Read) of Cusco Racing after team-mate Fabian Kreim (Frank Christian) crashed out early in the day.

Should 35-year old Delhi-based Gill, who has already sealed the 2016 APRC driver’s title his second since 2013, win on Monday when the Coffee Day Rally, concludes, he will be the only competitor to achieve the rare feat of winning all the rounds of a FIA Rally championship en route to annexing the crown. 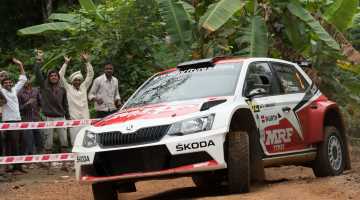 The day clearly belonged to Gill who drove the MRF Skoda Fabia R5 with aplomb, negotiating the tight and twisty estate roads with rare mastery, especially in the unforgiving corners that flowed one into another.

“We had no problems with our car as such. The speeds were quite slow due to the nature of the route, but still it was quite challenging. Though we have a good lead, the R5 is built for speed and I have to be in my rhythm. So, there is nothing like easing off. May be, I can drive 97 per cent instead of 100,” said Gill 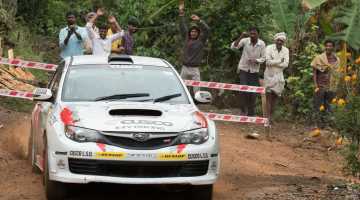 While Young was struggling with loss of power and over-heating brakes in his Subaru Impreza WRX STi, Kreim met with a misfortune early in the day when he crashed his R5 into a stone on a left-hander.

“We came over a crest and into a left-hander. I think I was carrying too much speed into the corner and crashed into the stone. Unfortunate, but that is the nature of motorsport. I will be driving tomorrow and hope to score some leg points,” said Kreim who won the German championship recently.

Placed third in the APRC was Pune-based Sanjay Takale (Nokiro Takeshita) of Cusco Racing while team-mate Yuya Sumiyama (Takahiro Yasui) had over-heating brakes and then went off-road on Stage 7. 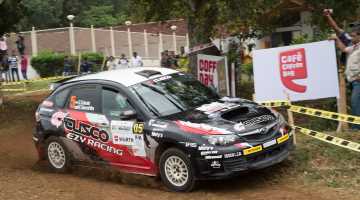 Kadur also led the INRC 2000 class where he was ahead of Dr Bikku Babu (Milen George) by over three minutes.