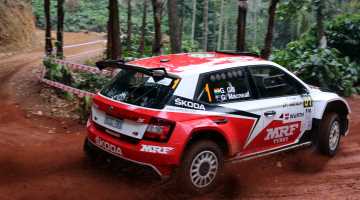 Gaurav Gill from India, had won all five APRC rallies this year and badly wanted to win at home and in front of his huge number of passionate fans on the sixth and final APRC event for the year, the Coffee Day India Rally.

While his team-mate Fabian Kreim from Germany took the initial lead on Friday’s super-special, when the event moved into the twisty narrow roads of the nearby coffee estates Gill stamped his authority quickly, moving into a commanding lead that he held onto to the finish.

“Undoubtedly, this is my most satisfying win if only because it was achieved in India and here in Chikkamagaluru. Coming into this Rally with five wins out of five, there was pressure on me and high expectations. More importantly, I hope that my wins and the record make motorsport more popular in India and also attract manufacturers and sponsors. 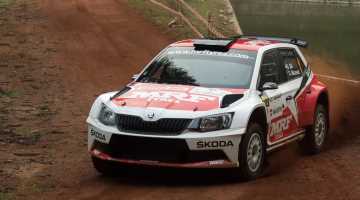 “It was an extremely difficult and technical rally because of the narrow, twisting route with hundreds of corners which required,” said Gill who celebrated the rare feat with his young family.

Gill’s task of winning in India was made slightly easier on Stage 4 when Kreim crashed out and blocked the road. Kreim explained “We came over a crest and into a left-hander. I think I was carrying too much speed into the corner and crashed into the stone wall on the outside. Unfortunate, but that is the nature of motorsport”. 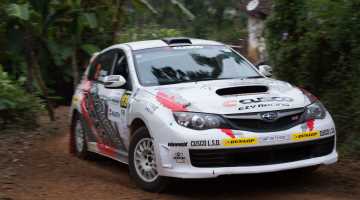 With Kreim out of contention Cusco driver Yuya Sumiyama took over second place but soon he was in trouble too with a lack of brakes in his Group N Subaru. Unfortunately, the lack of stopping power eventually caught the Japanese driver out and he went off-road and out of the event.

While New Zealander Mike Young was struggling with a down on power engine and over-heating brakes he was in the right spot to take over second place in the Cusco EZY Racing Subaru. Young looked to have the position in the bag until he struck further problems when his power-steering failed on the final morning. Some road-side repairs by co-driver Malcolm Read restored the power steering sufficiently to keep the pair in the event and onto their second place. 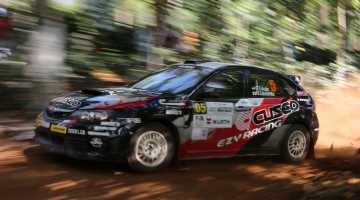 ‘Given all the challenges we had with the brakes, the engine and with the power steering I’m really happy just to finish, let alone finish second. It’s very very tough here as the roads are so tight and twisty – its tough on the car and the driver’, said a relieved Young at the finish.

Coming home in third place on the podium was dream come true for Indian driver Sanjay Takale. Team-mate to Young and also driving a Cusco EZY Racing Subaru the Pune based driver was equally surprised how tough the event was ‘It was very challenging to drive these stages. We have been driving at high speeds in New Zealand, Malaysia and Japan, while these roads in the coffee plantations are more technical and you need a lot of precision’. Takale also won the India Rally Championship round to add to his trophies.