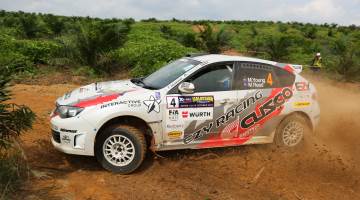 While in third overall at the fifth round of the FIA Asia Pacific Rally Championship (APRC) held in Malaysia this weekend, Kiwi driver Mike Young’s weekend ended in disappointment as he slipped into a ditch and was forced to retire after the car couldn’t be freed.

The drama unfolded for Young and Hamilton based co-driver Malcolm Read in the first stage on day two, after the duo climbed their way up to third at the end of the first leg in their Cusco EZY Racing Subaru Impreza.

“It was such a simple thing. The corner didn’t have a ditch to start with but suddenly the ditch came, we just slipped in and couldn’t get out,” said Young.

While the team had to retire and were not able to re-join due to event regulations, the car suffered no damage and would have been able to continue if that was an option.

“The car has absolutely no damage so while we’re gutted about retiring, we can be happy that the car is damage-free and ready for the next round. Plus we know that our speed was good so that’s always a positive to take home,” said Young.

Remaining upbeat about his performances to date, Young said he will now shift his focus to the next event on his calendar where he hopes he can fight back in the APRC Championship to claim a podium position for his Cusco EZY Racing team. 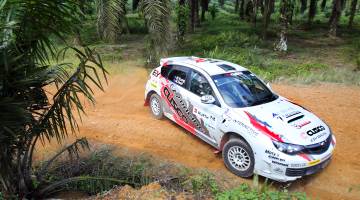 “I will come back fighting at the next round. I want to give my Cusco and EZY Racing a good result because their support has been amazing. They always give me the best car and their support is invaluable,” Young continued.

The next rally on Young’s calendar is the final round of the APRC, the Rally of India, held in December near Bangalore.

To keep up to date visit the Mike Young Motorsport Facebook page:  https://www.facebook.com/MikeYoungMotorsport