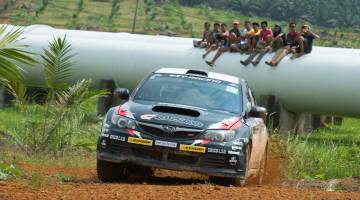 Takale, who was cross entered into both the APRC and MRC events, managed to claim second in the international APRC event while taking out the top spot in first in the national MRC rally.

“I have never been on such a high in my career,” said a ecstatic Takale. “I am very happy with the results and wish to thank everyone who has supported me including my family, friends and Cusco.”

As one of the more experienced drivers in the international field, Takale knew what to expect of the Malaysian roads and adjusted his driving style accordingly.

“I had a simple strategy this weekend; stay centre. I have experience in Malaysia and as everyone knows, anything can happen. If you are a little too aggressive you can go off, so you have to be very patient. That was what I saw happening to the other drivers so I kept my cool, stuck to my plan and made it here,” said Takale.

The only issue in an otherwise stellar weekend was a puncture in the last stage which didn’t cost him and co-driver Noriko Takeshita too much time but made handling in the mud very difficult. 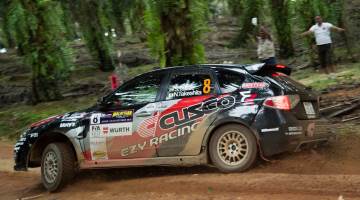 “We hit a rock on the right front corner in the last stage. We came in and couldn’t move away from the line we were on because it was too slippery, so we hit the rock. I knew straight away we would get a puncture and after half a kilometre, we had,” explained Takale.

Takale also credits his supporters and Cusco team for his success this weekend, including co-driver Takeshita who has been with him since Rally Whangarei earlier this year.

“Wow. The team has been excellent. There was nothing wrong with the car and they look after me very well. I have to really thank them for this one,” said Takale.

“And Noriko is very clever. She kept me on the road and at the start of each stage, there was a lot of instructions ‘turn early, brake early’ and so on.”

Now Takale turns his focus to the next event on his calendar, which is his home event, the Rally of India, around Bangalore. He said he is really looking forward to showing everyone at home what he does in the APRC.

“I am very excited to be rallying in India. I can’t wait to show everyone the car, the team, and to also show all the other APRC competitors what a fantastic place India is. It will be a great event I’m sure,” he said.

To keep up to date with Takale between rounds, visit his Facebook page: https://www.facebook.com/SanjayTakaleRallying