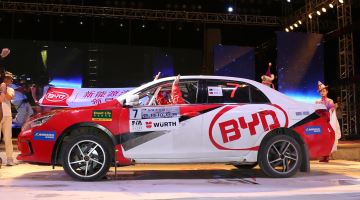 The car will be driven by regular APRC driver Mike Young from New Zealand who’s co-driver for this event is Long-she Zhung from China.

While the company has been competing in China for over two years, Young will be BYD’s first international driver and Young said: “This is an exciting opportunity to work with a rally team that’s bringing the latest battery and New Energy technology into motorsport. This is the future of racing and its great to be part of that process”.

While Young is entered into the FIA APRC event, he and BYD will not be eligible to score championship points as the car is entered under ASN regulations, but is still ecstatic to be among the first to drive a hybrid rally car in an FIA rally event.

“BYD, the APRC and even the WRC are very keen to see this car [BYD Hybrid] running in more international events and to the FIA rules and regulations, so I’m honoured to be among the first in the world to be offered the opportunity to do this,” continued Young. 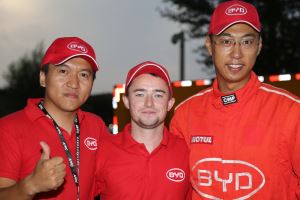 Team principal for BYD Hongzhi Zhang is equally excited by this opportunity “BYD is very happy to be the first hybrid car to enter the international FIA APRC and be a global leader in our category,”

Although not well known outside China, BYD produced more plug-in electric cars than any other company in the world last year and have backing from Warren Buffett’s Berkshire Hathaway and more recently Samsung Electronics.

With an eye on the future of rallying APRC Working Group president Steven Kennedy said: “Having the BYD Hybrid vehicle run in the APRC event has some great opportunities for us and rallying in the region. It will provide a significant test as it will be driven by a driver whose performance we know and will be observed by FIA APRC officials at the event who will provide feedback on the likely hood of this type of category being something we need to seek a category recognition for in the future.”

Zhangye is the new base for the 2016 FIA APRC China Rally and also doubles as a round of the Chinese Rally Championship (CRC). With most of event run in desert like conditions in temperature of 35C plus, the 239 kilometres of special stages will be a real challenge for all competitors.