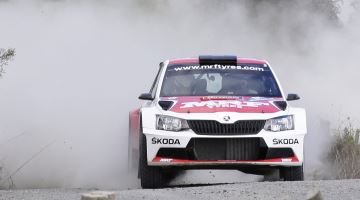 “The Chinese market is paramount for the ŠKODA brand. So it is no surprise that we want to show our best side there and aim for the win,” said ŠKODA Motorsport Director Michal Hrabánek, and added: “The ŠKODA drivers are doing a fantastic job this season and I am sure that they will be up there right at the front again in China. It will be far from easy since the event is completely new territory for us as the location has changed compared with the APRC rallies in previous years in China.”

This is the first time that the prestigious continental championship has a rally in a desert region in store for the ŠKODA team.

In previous years, the APRC Rally China was held in Longyou, in the province of Zhejiang around 400 kilometres away from the metropolis of Shanghai, but this season the organizers switched the location to the north of the People’s Republic, to Zhangye in the province of Gansu. There will be a total of nine special stages, over which the drivers and co-drivers must complete 235.45 kilometres on the gravel tracks.

A new challenge for the experienced ŠKODA MRF team. But the ŠKODA Fabia R5’s season tally to date is positive and speaks for itself: Two races, two one-two results – you can’t do better than that. 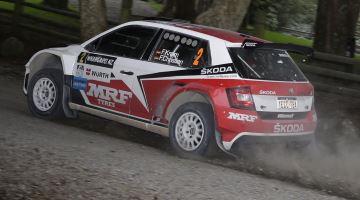 Together with co-driver Glenn Macneall, Gaurav Gill won both times, so the Indian’s interim conclusion is correspondingly positive: “The season couldn’t have gotten off to a better start for me. The two wins mean I have given myself a slight buffer in the championship, but I can’t rest on that since the competition is strong, particularly in my own ranks.”

He means Fabian Kreim, who in second place in the overall standings of the APRC with 61 points behind Gill (77) is still in with a good chance of the title. The German who is contesting the APRC for the first time this season was convincing in the first two rallies, finishing second both times. And on gravel – a surface on which the 23-year-old had never contested a rally before. “I have already learned a great deal so far this season and am pleased with my development. As a newcomer, to be second in the championship after two rallies is fantastic,” said Kreim. In addition to the APRC, he also contests the DRM – also with the ŠKODA Fabia R5 and also extremely successfully. With his win at the Thuringia rally in mid-July, Kreim extended his lead in the overall classification of the German championship further.

For the ŠKODA junior driver, the event in the Far East is also a trial run for the WRC in Germany (18 to 21 August), where Kreim will compete with the world’s elite in rallying. The ŠKODA Motorsport team will contest the FIA World Rally Championship (WRC 2) there. Then the team will also travel to China: The WRC event in ŠKODA’s core market of China takes place from 8 to 11 September.