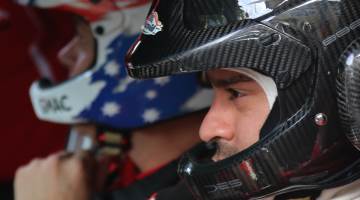 Team MRF Skoda driver, Gaurav Gill, has built up a commanding lead at the opening day of the International Rally of Queensland, the second round of the Asia Pacific Rally Championship (APRC), held around Imbil in Australia’s Sunshine Coast.

After eight stages based predominately in the forest, Gill (India) and local co-driver Glenn Macneall built up a lead of almost two minutes over their Team MRF Skoda team-mate Fabian Kreim of Germany.

Gill said: “It’s been a good day but quite challenging. The roads are quite slippery but are consistently slippery. But it wasn’t easy at all because this is the first time I’m driving this car on slippery surfaces and it’s very difficult getting used to what the car is going to do.

“We haven’t found the correct setup but our only saving grace was our tyres. We pushed quite hard in the morning because I had a level of confidence with the car and maintained that rhythm for the rest of the day.” 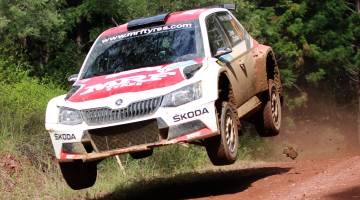 In Kreim’s second gravel event, he has managed to hold off both Michael Young and Nathan Quinn, who are both vastly experienced on these roads.

Kreim said: “So far, so good for us. It’s very difficult for us here on this kind of gravel and with so much mud, but we are very happy.

“I think tomorrow we drive very safe and hope we can get second place for the team,” continued Kreim.

Young said: “It was a much better afternoon for us. Changing the tyres worked well and gave me so much confidence. We were basically going 40 seconds quicker in afternoon stages than in the morning. Otherwise, it was a good afternoon with no mistakes.” 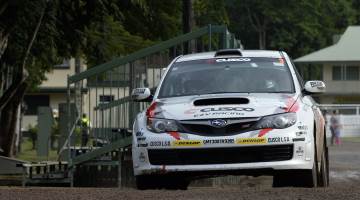 Quinn, from Coffs Coast in New South Wales, had intermittent boost issues who caused him lose time over the day, meaning the local favourite ends the day in fourth, though he vows to fight back tomorrow if he can fix the problem.

“We’ve been having turbo problems all day. We thought we fixed it at lunch, but we didn’t, so hopefully we make some changes tonight. It’s just really frustrating because we have really good road speed but every time we get to a straight, we’re having to back off.”

The problem remains a mystery for Quinn, who suspects it may be a mapping issue or a turbocharger.

Rounding out the top five is Japanese driver, Atsushi Masamura in a Mitsubishi Lancer Evolution. He said: “Good day today. A bit slow but we must finish this rally.”

Takale, who returned to the APRC this year following a serious illness in 2015, said he is very happy to finish the first day in Queensland.

“I’m very happy. We got quicker throughout the day and even beat on my own times by two minutes in the afternoon. I am getting the rhythm back but I have to be patient. As you know, I was really sick for one year so I have to get back into the groove before I start doing anything else,” explained Takale.