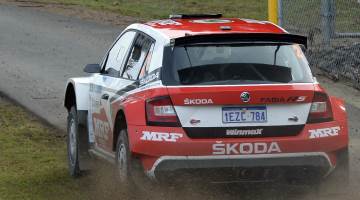 Heavy rain over the next two days could be a serious game-changer at the second round of the Asia Pacific Rally Championship (APRC), the International Rally of Queensland, starting tonight in Maroochydore.

With locals predicting upwards of 200mm of rain over the next two days, the heavy rain could affect roads around the Imbil forest where the stages are held, throwing an additional challenge to the drivers on the already tricky, narrow and slippery roads.

Current APRC Championship leader, Gaurav Gill piloting a Skoda Fabia R5, who has done the rally for several years said the potential rain could quickly turn this rally into one of the hardest on the calendar.

“It doesn’t matter how well we know the rally because the conditions change really quickly here, and from having lots of grip and good traction, to absolutely slipping and sliding like in Malaysia, can turn the tables right around with one splash of rain,” said Gill.

Meanwhile Team MRF team-mate, Fabian Kreim, who is making his Australian debut this weekend maintains this weekend is all about learning and he won’t be pushing too hard, particularly with the forecast rain which could make driving difficult.

New Zealand driver Michael Young, in a heavier Group N Subaru Impreza, said the narrow and twisty Queensland roads means he may not be able to keep up with the faster Skoda’s, though maintains it is all about APRC Championship points here.

“We’ll attack this rally the same as the others… Malcolm [Read, co-driver] and I will start off nice and easy with a nice clean run then build up our pace. I know how devastating the roads can be and how easily you can get caught out, so you need to drive with a level head and not have too many moments,” said Young.

Young’s Cusco team-mate, Sanjay Takale, is also hunting down a podium place to put himself back in contention for the overall drivers’ championship.

Local Australian driver, Nathan Quinn, is also set to take on the international drivers though he bent a steering arm in his Mitsubishi Evolution during this morning’s shakedown. He is joined by compatriot Mark Beard in a Subaru Impreza.

The final two drivers hoping for a solid result on Queensland’s notoriously tricky roads are Japanese drivers Atsushi Masamura in a Mitsubishi Evolution and Fuyuhiko Takahashi in a Subaru Impreza.

The International Rally of Queensland gets underway with a ceremonial start tonight at Black Swan Park near the Maroochydore waterfront. Teams then contest 240 competitive kilometres across 16 closed special stages on Saturday and Sunday before finishing at the Imbil Showgrounds.