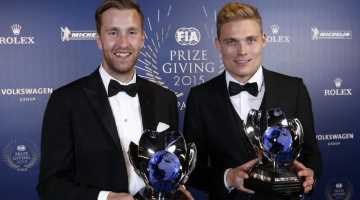 Last Friday in Paris, at the FIA’s annual awards gala, Pontus Tidemand and Emil Axelsson were crowned champions of the Asia-Pacific Rally Championship for 2015.

ŠKODA received the awards for the driver and manufacturer championship in the prestigious championship for the fourth consecutive year. Works driver Tidemand had led the championship with five victories and a second-place finish, wrapping up the season with a victory in the all-new ŠKODA Fabia R5 at the China Rally in Longyou.