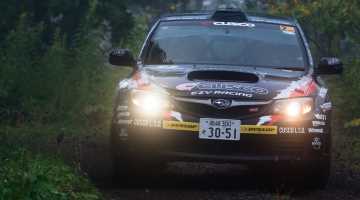 Young arrived in Japan third in the Asia Pacific Rally championship points and after crashing out on the last round in Malaysia, the first time in two seasons – the young New Zealander was keen to make amends for his Malaysian mistake. As this event was the Cusco EZY Racing Team’s home event, they too did not leave anything to chance installing a new engine block, gearbox and suspension to the Group N Subaru Impreza prior to the event.

And while the week leading up to the event was brilliantly fine and hot, come race-day the heavens opened up and heavy rain turned the narrow forest tracks into slush.

Even in these tricky conditions Young was quickly on the pace and by stage 4 was sitting in second place overall. However at the next refuel point the car wouldn’t restart and nearly 30 minutes was lost trying to find the fault. Luckily the service-crew was at hand and although unable to touch the car, was able to give advice to Young and co-driver Malcolm Read, to find what turned out to be a blown fuse. Checking in 23 minutes late to the next time control resulted in a three minute and forty second penalty, dropping them down the start order and falling to 5th place.

By the evening Young had made up time and got back into third “One of the hardest days rallying in my rally career, fully concentrating on trying to keep the car straight at 150 Kph, aquaplaning and pushing water out everywhere was pretty tough, but even in those conditions we managed to win a stage and get ourselves back into a podium spot”. 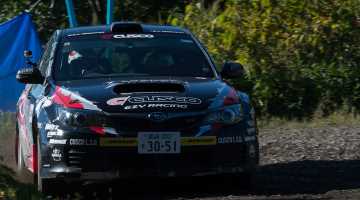 Day 2 was a complete change in the weather with bright sunshine, but the roads still very slippery under the trees and with a lot of standing water remaining. By the second stage of the morning Young had climbed back into second place and with overall leader Pontus Tidemand from Sweden driving a very fast Skoda S2000 too far ahead to chase, Young settled into consolidating his second spot.

Arriving back to final service there was a huge cheer from the team and local supporters, everyone aware how much the place and finish meant “Very happy, good finish in the home-ground of Cusco. Second place was a good bonus for us, especially as we came into the rally just wanting to finish, try stick to the plan and make through. Second place is awesome and really good points in Asia Cup, Production Cup and APRC as well”.

China Rally is next, starting 30 November, “our focus there will be securing the Production Cup for 2015 and getting more points in Asia Cup, we’re second at the moment with China and India rallies to go”.