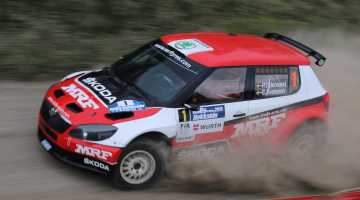 After five rounds, it is a fact – Pontus Tidemand and his co-driver Emil Axelsson take the title in the FIA Asia-Pacific Rally Championship for SKODA Motorsport. At this weekend’s Rally Hokkaido, they made a stunning performance , won the event and scored so many points that no other competitor has a chance to catch up even though one round remain in the championship.

“Right now it feels indescribably good” said a pleased Pontus after finishing on Sunday. “To become APRC champion was the ultimate goal this season, both for SKODA’s sake and for our own. I’m so happy that we managed to deliver this result with one event to go. Things could not have gone any better!”

The weekend in Japan started with a couple of very wet days. The rain began to fall heavily before Friday’s opening super special and it continued to rain for two days. Pontus took the lead right from start when he beat his main competitor Gaurav Gill by nearly a second on the first stage. It was set for a thrilling fight between the two of them, but it ended abruptly when Gill was forced to retire with technical problems already on Saturday morning.

The weather resulted in difficult road conditions and major challenges for the contestants, and many of them suffered from issues and had to retire. Pontus, however, managed to stay away from trouble as he mastered Saturday’s ten stages.

“It was really tricky in some places, especially since we were the first car on the road” said Pontus. “It was slippery and rough with standing water here and there, at the same time as the rain continued to pour down. But this is the kind of practice that I definitely consider a great experience for the future. The roads were also fun to drive and it was fascinating to see how the nature changed. At first it felt like we were in the middle of Sweden, then it reminded us more of Rally Germany and when we came to the northern parts, it was like being back in New Zealand.”

No competitor could keep up with Pontus’ pace as he extended the gap between himself and the rest of the field more and more for each stage. On Saturday evening, when the first 11 stages of the rally were completed, Pontus had a lead of almost five minutes and basically just needed to get to the finish to secure the title.

Luckily Sunday’s nine stages offered no drama – and no rain. All in all, Pontus took 18 stage wins on the overall 20 stages and the victory margin measured incredibly 12 minutes. 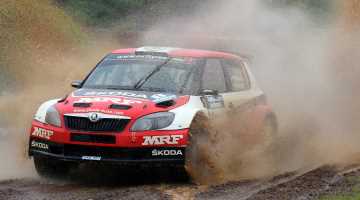 “It would have been awesome to win the title after a close battle, so it was a bummer to miss out on that when Gill retired” said Pontus. “But it proves once again that anything quickly can happen in rallying and you simply have to run your own race. We had a great weekend where everything worked flawlessly and just like in previous events, both the team and Emil have done a fantastic job. That is what makes us finish on top here today. Now we look forward to the last event in China, where we will make APRC debut with the Fabia R5, that will be fun for sure.”

During his first year as a SKODA driver, Pontus has so far contested all five of the FIA Asia Pacific Rally Championship rounds, where he has won four and finished second once. In addition to that he has also done three WRC 2 rounds for SKODA and has finished on the podium every time. The APRC title is Pontus’ second international title in two years; in 2013 he became Junior World Rally Champion.

Pontus and Emil celebrate their victory by already next week head to France and Corsica for the next WRC round, which is run on 1-4 October. The sixth and last round of the APRC takes place in China between 30 October and 1 November.