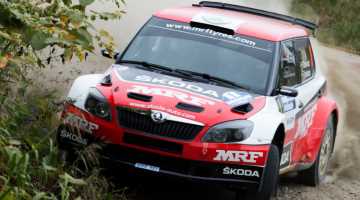 After the early demise of their Team MRF team-mates, Gaurav Gill and Glenn Macneall, the Swedish duo were able to control the rally, eventually winning by an impressive margin of nearly 12 minutes.

Driving their Race Torque prepared Skoda Fabia Super 2000, it was the pair’s fourth win from the five APRC events held so far this year, a remarkable effort given that they are competing on all rounds of the championship for the first time.

“Right now it feels indescribably good,” Tidemand said after the finish of the two-day, 20 stage event.

“To become APRC champion was the ultimate goal this season, both for Skoda’s sake and for our own. I’m so happy that we managed to deliver this result with one event to go. Things could not have gone any better!”

Heavy rain across the weekend made conditions tricky for all competitors in the event. The rain began to fall heavily before Friday’s opening super special.

“It was really tricky in some places, especially since we were the first car on the road,” Tidemand added.

“It was slippery and rough with standing water here and there, at the same time as the rain continued to pour down. But this is the kind of practice that I definitely consider a great experience for the future. 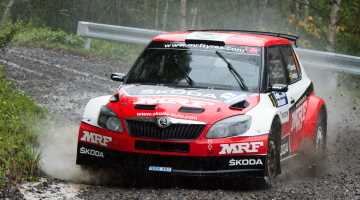 “The roads were also fun to drive and it was fascinating to see how the nature changed. At first it felt like we were in the middle of Sweden, then it reminded us more of Rally Germany, and when we came to the northern parts, it was like being back in New Zealand.”

“It would have been awesome to win the title after a close battle, so it was a bummer to miss out on that when Gill retired.

“But it proves once again that anything can happen in rallying and you simply have to run your own race. We had a great weekend where everything worked flawlessly, and just like in previous events, both the team and Emil have done a fantastic job.

“Now we look forward to the last event in China, and that will be fun, for sure.”

While the Swedish pair celebrated the spoils of victory, it was a disappointing weekend for their Indian/Australia team-mates, Gill and Macneall.

Their event had started out well, but a driveshaft problem on the first day of the rally cost them any chance of a good result.

“It’s great to take another victory in the APRC, and another APRC title, and congratulations to Pontus and Emil on another outstanding drive,” Heenan said.

“It would have been great to have both Pontus and Gaurav fighting it out in the stages, but it wasn’t to be.

“The weather also played its part in the rally, but the MRF tyres worked well again and allowed the team to take a comprehensive victory.

The sixth and final round of the APRC takes place in China between October 30 and November 1.