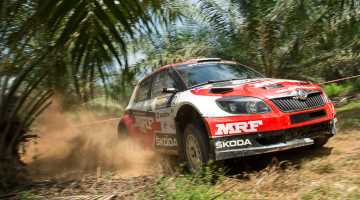 Pontus Tidemand’s third win of the season gives him a commanding lead in the Asia-Pacific Rally Championship.

Swedish star Pontus Tidemand has taken a hard fought victory in the fourth round of the Asia-Pacific Rally Championship (APRC), extending his series lead over team-mate Gaurav Gill.

Driving his Team MRF Skoda Fabia Super 2000, Tidemand and co-driver, Emil Axelsson, took a victory of nearly two minutes in hot and steamy conditions like they had never before experienced.

Such was the heat in Malaysia that drivers and co-drivers wore cooling vests throughout the rally. The humid conditions also took a toll on the rally cars, with many of Team MRF’s rivals failing to finish.

“I was prepared that the heat would be close to unbearable, but it was actually even tougher than I expected” Tidemand after spraying the victory champagne on Sunday afternoon.

“This is the most extreme rally experience I have ever had, and I will remember this weekend for the rest of my life.

“But the fact that it was so tough makes us treasure our win even more, and it is a nice feeling to know that you are capable of more than you think.

“I am very satisfied with my own and Emil’s performance, but also very impressed by the other participants and the teams that work so hard in the heat.

Despite winning in Malaysia last year, the event wasn’t as kind to India’s Gaurav Gill and Australian co-driver Glenn Macneall in 2015. 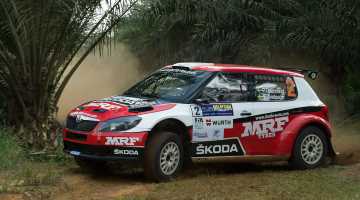 Running first on the road on day one, they were slowed regularly with grass clogging the radiator, causing the engine to overheat and having to stop on several occasions.

“The temperature went up and we had to stop and remove the whole front bumper, and so we lost nearly a whole minute,” Gill said.

However, despite his disappointment, Gill was thrilled with Team MRF’s success, and the team’s fourth win of the season.

“Great result for Team MRF, with both cars back at the end. It is good for the championship and the team.

“It’s been a crazy weekend for us though, especially with the tall grass in the stages, and to top it off, we had a diff problem on the final day, but it’s great to finish in second place.”

Skoda’s lead in the APRC Manufacturers’ Championship has now grown to 80 points over Subaru and Mitsubishi, while Team MRF / Skoda have an unassailable lead in the APRC Teams’ Trophy.
Team MRF boss, Lane Heenan, said that the Malaysian Rally was once again a tough event for both drivers and cars.

“There was lots of long grass on the stages, and both our drivers had to stop in stages several times to clean the grass from the radiator ducts as the cars were overheating.

“Gill had a few more stops, and that was basically the difference at the end of Leg 1, and Pontus was able to maintain that advantage to the finish.

“But the Team MRF Skodas again performed well and we’re happy with another 1-2 finish, and our fourth victory of the season.”

The next round of the Asia-Pacific Rally Championship is Rally Hokkaido in Japan, to be held from September 18-20.