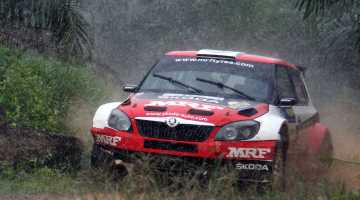 It takes a large amount of concentration and perseverance to even make it through Malaysian Rally, the fourth round of the FIA Asia-Pacific Rally Championship. Swedish rally driver Pontus Tidemand did more than that – after two competitive days in massive heat, he took yet another valuable win for ŠKODA Motorsport and MRF Tyres in his ŠKODA Fabia Super 2000.

Just like expected, Malaysian Rally became the most demanding challenge so far this year. To be focused and fast is not enough here; the heat and the humidity offer the biggest competition, both for crews and cars. The cooling vests that the drivers and co-drivers use only helps to a certain limit and with short liaison distances, there is not much time to fill up with fluids, which makes it more difficult to keep the concentration and easy to make mistakes. The cars become overheated with the heat taking its toll on components such as tyres and dampers.

“I was prepared that the heat would be close to unbearable, but it was actually even tougher than I expected” said Tidemand. “This is the most extreme rally experience I have ever had and I will remember this weekend for the rest of my life” said Pontus with a smile. “But the fact that it was so tough makes us treasure our win even more and it is a nice feeling to know that you are capable of more than you think. I am very satisfied with my own and Emil’s performance, but also very impressed by the other participants and the teams that work so hard in the heat. Now I really look forward to the last two APRC rounds!” 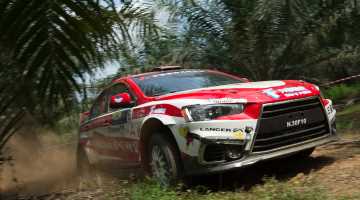 “It started pretty okay for us and we had some really good stages, but towards the afternoon it was on the verge of what you can handle. Considering that feeling, we are happy that we could give that little bit extra and just stand the heat long enough to get to the finish on Saturday.”

Tidemands MRF team-mate Gaurav Gill from India is a past winner in Malaysia, however his event was plagued by grass clogging the radiator air in-takes causing the engine to over-heat, forcing him and co-driver Glenn Macneall to stop on numerous occasions, especially on day 1 when they were first car on the road. Gill focussed on the positives though at the finish, “Great result for team MRF, both cars back at the end, good for the championship and the team. Its been a crazy weekend for us though, especially with the tall grass in the stages and to top it off we had a diff problem today”.

Third place was China’s Fan Fan who eased off the pace in the final stages when the rain hit and to conserve the Soueast Motor Mitsubishi Lancer EX for the next APRC round in Japan.

Cusco Racings Subaru Impreza driver, Genki Takeuchi finished the rally fourth and Immens Motorsports Subaru Impreza of Japanese Hitoshi Takayama rounded out the top 5. The two Japanese drivers were competing in their first international events and were separated by just 33 seconds at the finish.

The last classified finisher was Kazuhiro Hayashi with co-driver Osamu Yoda in a 2wd Proton Satria Neo. “It was a rather nervous event for me as I was concern on finishing the event and not doing any damage to the rented rally car” said Hayashi when he arrived back at the finish.

Missing from the list was Sri Lankan driver Dinesh Deheragoda who retired on Sunday afternoon after an alternator belt broke resulting in an overheating engine and no power-steering. 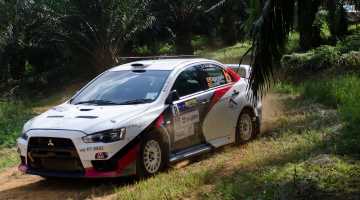 EZY Racing driver Mike Young from New Zealand returned to compete on Sunday, after a heavy crash on Stage 1. “The Cusco team did a fantastic job to repair the car and allow us a run on Sunday” said Young.

Sunday night, straight after the ceremonial finish the crews packed the cars in their containers to be shipped to Japan for Rally Hokkaido, 18th to 20th September, Round 5 of the Asia Pacific Rally Championship.