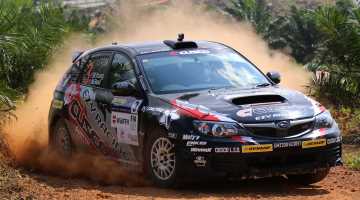 After showing good pace during shakedown and second fastest on the Rallysafe split-times Mike Young’s Malaysian Rally ended in spectacular fashion, clouting a bank half-way through the first stage. The New Zealander managed to keep his Cusco EZY Racing Subaru Impreza going for a few more kilometres before pulling over to save further damage to the car.

Back at the service park in Johor Baru, Young said, “Definitely not the rally we were hoping for, a small mistake but it was enough to end the rally. The Malaysian rally can bite hard and very easily.

“I carried too much speed through a left hand corner and with only 40m to the next corner it was impossible to scrub enough speed off for the next right. The impact with a bank was enough to push the front guard in and break the left hand lower arm. We tried to continue but with the tyre rubbing against the guard it caused the tyre to go flat. At that point we decided to stop to avoid further damage to the car.”

“A disappointing end especially with all the support we’re getting from EZY Corporation who are based in Singapore. We have to look at the positives and learn from our mistakes, we will be better and stronger for Hokkaido”.

It was Young’s first DNF since partnering up with fellow New Zealander Malcolm Read exactly two years earlier on the 2013 Malaysian Rally. Since that event, the kiwi pair have finished all ten events they’ve started.

The CUSCO EZY Racing team did an amazing job of rebuilding the left front suspension and panel-beating the front guard back into shape to get Young and back onto the stages for Day 2. 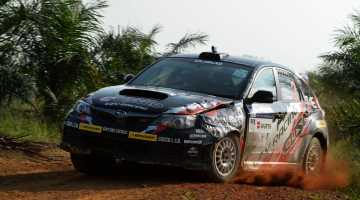 The pair were immediately back on the pace and just to show what might have been, were second fastest time on Stage 9, then a string of third places.

At the finish podium Young was feeling a bit more up-beat after completing Day 2 “Today brought my confidence back, setting a second fastest time in the first stage and top 3 in the next 3. Pouring rain and a flat tyre in the last stage destroyed any chance of recovering some points though – we only ended up with only one point for the whole event. Onwards and upwards from here on, we are ready to hit the reset button in Hokkaido. It’s a rally we love and one I always look forward to being Cusco’s home rally.”

The extra point gained in Malaysia was enough to move Young into third equal in the ‘FIA Asia Pacific Rally Cup powered by Würth’ and the New Zealander easily leads the Production Cup after his competitor in this class, Subhan Aksa from Indonesia did not start in Malaysia.

Malaysia’s result does make winning back the FIA Asia Cup Young won in 2013 slightly harder, however this sub-category is based on the best three results from the four Asian events. Three good finishes in the remaining APRC events of 2015, could change everything.