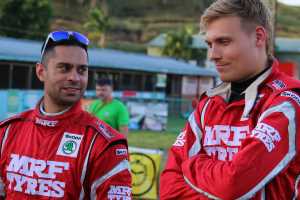 The most experienced field in years, including a world champion driver from Sweden and representatives from seven other countries, will fight for victory in the International Rally of Queensland (IROQ) on the Sunshine Coast on 19-21 June.

Eleven entries for Round 3 of the FIA Asia Pacific Rally Championship (APRC) headline an expected starting list of around 55 cars for Queensland’s only international motorsport fixture.

Tidemand will be followed by his fellow driver in the Indian-owned MRF team, Gaurav Gill, the 2013 Asia Pacific Champion and a three-time Indian champion. Tidemand and Gill, plus New Caledonia-based Frenchman Jean-Louis Leyraud, will drive Skoda Fabia S2000 cars. 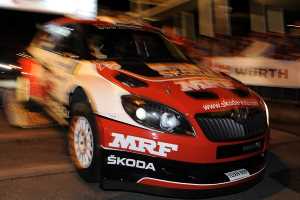 Other drivers and co-drivers will come from Japan, Italy, Indonesia and Australia.

“As IROQ is part of a series that also visits Japan, China, Malaysia, India, New Zealand and New Caledonia it naturally attracts the cream of the region’s drivers to the Sunshine Coast,” he said.

“Together, the 22 drivers and co-drivers on this list have accounted for numerous international and national titles. Many, including Pontus Tidemand and his co-driver Emil Axelsson and the Indonesian-based crew of Subhan Aksa and his Italian co-driver Nicola Arena, have competed in the ultimate rally competition, the FIA World Rally Championship.

“Pontus and Emil claimed a podium for Skoda in the WRC2 category at the recent Rally de Portugal, while Australian champion co-driver Dale Moscatt will be rushing back to Caloundra after contesting WRC Rally Italia Sardegna next weekend.”

Overseas-based internationals will be matched by Australia’s best at IROQ.

Evans is one of four Australian drivers entered in both the Asia Pacific and national rounds at IROQ.

Competition in the International Rally of Queensland starts in the Sunshine Coast hinterland town of Kenilworth at 7.30 am on Saturday 20 June.

It finishes with podium presentations at the competitors’ service park in the Mary Valley Showgrounds in Imbil on Sunday afternoon, after 18 Special Stages totalling almost 230 kilometres of forest racing. Competitors and enthusiasts staying in Imbil will be entertained at a free street party organised by the local community.

Adult tickets from $30 a day can be purchased on-line at www.rallyqueensland.com.au, or at the Coates Hire Ceremonial Start, service park or entry points to three dedicated spectator locations.

Spectator maps, times and instructions are available at www.rallyqueensland.com.au.

Before the rally starts, Sunshine Coast fans will be able to meet the drivers and see their cars up-close at two events in Caloundra, where the official rally headquarters, media centre and hotel will be at Oaks Oasis Resort.

Sunco Hyundai in Industrial Avenue will welcome the public when its service department hosts technical scrutineering for APRC cars on Thursday afternoon 18 June.

On Friday from 4.30 pm, the full field of drivers and cars will turn out for the official Coates Hire Ceremonial Start in the beachside town’s main street, Bulcock Street. Crews will be available for autographs, photographs and interviews before the first car crosses the departure ramp just after 5.45 pm.

The rally is supported through Tourism and Events Queensland’s Regional Development Program as part of a growing calendar of events across the State. It also receives valuable assistance from
the Sunshine Coast Regional Council.