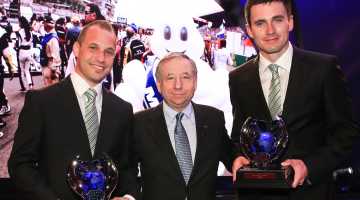 Doha, 6 December 2014: It was a big day for the ŠKODA Motorsport team with the Czech automobile manufacturer’s drivers crowned Asia-Pacific and European rally champions for the third time in a row by the International Automobile Federation (FIA).

As well as the trophies, ŠKODA also received plenty of recognition from the elite of the motorsport world, who had gathered in the Qatari capital Doha for the official award ceremony for the 2014 season. The Fabia Super 2000 also became the most successful model in ŠKODA’s 113-year motorsport history.

“We can be proud of the success we achieved with our Fabia Super 2000 last year. And the entire ŠKODA Motorsport team once again did a great job,” said ŠKODA Motorsport Director Michal Hrabánek. “A big thank you obviously goes to our crews, for whom the trophies are just reward for an outstanding season,” Hrabánek continued.

In the FIA Asia-Pacific Rally Championship (APRC), ŠKODA was honoured for completing a hat-trick of back-to-back titles in the Manufacturers’ and Drivers’ Championships following a perfect season, with six wins from six races. New champions Jan Kopecký/Pavel Dresler (CZ/CZ) also achieved a feat worthy of champions: they became the first duo ever to win the Drivers’ titles in the FIA European Rally Championship (ERC) and then the APRC in consecutive years. Chris Atkinson (AUS) had previously won the APRC Drivers’ title in 2012, while Gaurav Gill (IND), who finished third this year, was crowned champion in 2013 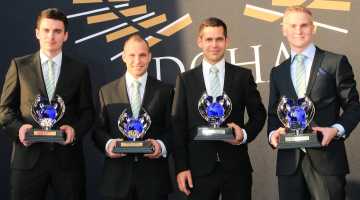 A team in a ŠKODA Fabia Super 2000 also won the title in the ERC for the third year in a row, this time courtesy of Esapekka Lappi/Janne Ferm (FIN/FIN). Fellow ŠKODA duo Sepp Wiegand/Frank Christian (D/D) of the ŠKODA AUTO Deutschland team finished runner-up in the continental championship to complete a one-two for ŠKODA. Lappi followed in the footsteps of his compatriot Juho Hänninen (2012) and Kopecký (2013), who also won the European title in a ŠKODA Fabia Super 2000.

FIA President Jean Todt presented this year’s title winners Kopecký/Dresler and Lappi/Ferm with their trophies at an award ceremony in Doha. Also among those receiving trophies were Sébastien Ogier/Julien Ingrassia. The French pair won the World Rally Championship for Volkswagen for a second year running in 2014.

This shower of titles was a fitting end to the incredible success story of the Fabia Super 2000 at ŠKODA Motorsport. From 2015, the ŠKODA Fabia R 5 will follow in the footsteps of the most successful rally car in the company’s 113-year motorsport history. The international public is currently enjoying a preview of ŠKODA’s new rally car at the Essen Motor Show, in the form of an R 5 concept car. “The Fabia R 5 is the future of rallying for us,” said ŠKODA Motorsport Director Michal Hrabánek. “The Fabia R 5 is expected to be homologated by mid-2015.”