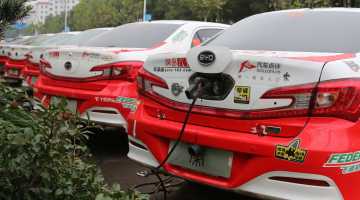 At one end of the Parc Ferme at the APRC China Rally a row of eight rally cars were parked, all cabled to a nearby power-pole.

This is the BYD team and the first car manufacturer to enter international rallying used a ‘Hybrid’ powered car on such a large scale. For now BYD (Build Your Dreams) is concentrating just on the Chinese Rally Championship but they are looking at the possibility of entering the APRC and other international rallies in the future.

APRC TV interviewed Mr Gao Zi-kai, Deputy General Manager of BYD Auto Sales and this is what he had to say about BYD and their reasons for entering a rally team in CRC. 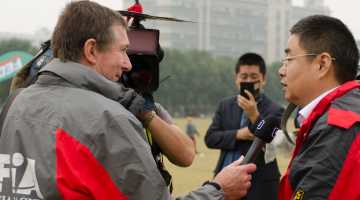 “First, we want to promote new energy vehicles to more people though car rally. Second, we want to test the performance of our cars by this competition，and find the problems，constantly optimize the product. Third, we hope through this platform to enhance our brand glamour，meanwhile make more and more people know and like BYD. Fourth, as the first hybrid rally team in the world, we represent the most technically advanced in the world, we hope our participation can make the rally richer and fuller.”

“This is the first year that we participate in rally (CRC), now the events come to the end, we will do some summaries and plans. When we make plans for the next year, we will consider taking part in APRC.”

“Whether we will participate in APRC is uncertain now, but as a trend, we would take part more events in china and even the world in the future to show our cars.”

“Because of Qin’s (the brand name of BYD rally car) superior performance in rally, we believe that in the future, new energy vehicles will fill the (service-park) autodrome.”

Story and photos by aprc.tv