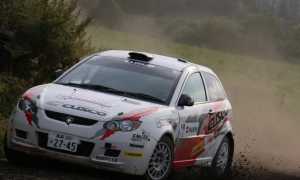 The Asia Pacific Rally Championship’s (APRC) only New Zealand driver, Michael Young, is chasing down valuable APRC points in Japan this weekend, as he aims to claim three championship titles at the penultimate round in Hokkaido.

Young, originally from Opotiki, took out three APRC titles last year and speaking from the service park in Obihiro city, said he’s working on securing the two-wheel-drive and production cups this year, alongside the junior cup he secured in Malaysia.

“It’s a bit more about the championship and getting points now. Obviously winning the production cup [class] would be nice to win this year to make it three championships in one season again like last year, so now that we’ve secured Junior Cup and two-wheel-drive is almost secure, that’s definitely what we’re aiming for,” explained Young.
Young and his Cusco Racing team have been working hard on the Cusco Racing Proton Satria Neo, making minor handling adjustments to the car to ensure Young and co-driver Malcolm Read are able to get maximum speed out of the car, aiding their championship quest.

“We’ve made a few new changes to the car here at testing and they’re working well for my driving style. I quite enjoy driving it and it’s much easier to drive the car with those changes. It’s basically just making sure we have the right setup for the stages here as we really want a good result.” 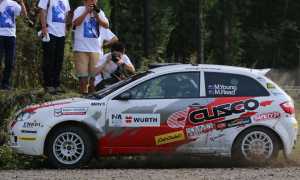 Although, the Kiwi duo know a good result in Japan won’t come easy with the roads being described as a true mix between fast, flowing and open, to tight, twisty and slippery.

Young said: “The roads can be very nice in the first pass then suddenly change to something completely different for the second pass, and in some cases, it’s actually like a completely different rally. The ruts can be difficult and are something new so I have to adapt my driving to suit.
“Plus to be fast here, our pace-notes [detailed directions] have to be spot on. Malcolm and I have been working on a good system though so I’m confident that we’ll be fine.”

The event starts at Obihiro in Japan’s northern island, Hokkaido on Friday evening. The teams then compete across 18 special stages covering almost 222 kilometres before finishing on Sunday at approximately 5.00pm back in Obihiro.

To keep up to date with Michael Young and his team during the rally, head to: https://www.facebook.com/MikeYoungMotorsport