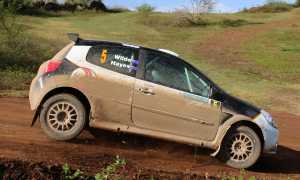 “Wow, what a rally,” Wilde said after finishing the event, which was held near Noumea on the tropical island of New Caledonia, 1500kms east of Brisbane.

Heavy rain across the weekend caused several stages to be cancelled. Those that were run were particularly challenging for competitors, especially first timers like Wilde.

“I’ve never driven on anything as slippery,” the Verandah Apartments Rally Team driver said. “There are so many different surfaces and it’s very difficult to read.”

Wilde’s Renault Clio fell victim to the slippy roads on the second last stage of Leg One.

“Unfortunately, I had a low-speed spin on a very slippery corner and hit a rock which damaged the power steering pulley,” he explained. “We limped to the end of that stage but, of course, the alternator is on the same belt so the car ran out of power.” 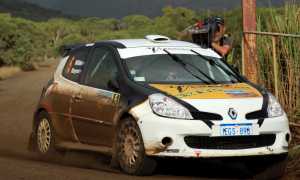 Wilde and co-driver Bill Hayes turned to bush mechanic techniques in an attempt to temporarily fix the problem. They used shoelaces and cable ties to run the alternator, but to no avail. The pair was forced to retire for the day.

The Verandah Apartments Rally Team service crew worked to fix the problem overnight and, although they would not be eligible for an outright result, Wilde and Hayes restarted in Leg Two of the event in an attempt to earn bonus championship points.

In Leg Two, which was cut from eight stages to four because of wet weather, the boys finished fourth overall and second APRC competitors.

The next APRC event is round three, the International Rally of Queensland, from June 20 to 22. It’s a rally Wilde has competed in twice before, including last year when he finished second in the Australian Rally Championship section.