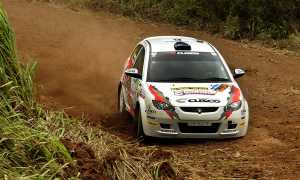 Kiwi rally driver, Michael Young, had a clean sweep of results during his first visit to the tropical island of New Caledonia, the second round of the Asia Pacific Rally Championship, finishing third overall moving him to first place in both the two-wheel-drive and production cup classes.

After vowing to drive to survive, the New Zealander kept true to his word and brought his Cusco Racing Proton Satria Neo home in one piece with the help of compatriot Malcolm Read [co-driver].

“It was such a tough rally we’re happy to get third, it’s so hard on the car the main thing is surviving it was so slippery, we’re just happy to make to the end. It was big bag of points for us and that’s what the championships all about, scoring every time,” explained Young.

Day one was real a mixture of conditions, sometimes dry with billowing dust and within a few kilometres, changing to pouring tropical rain. Two of Young’s closest rivals crashed off on the super slippery roads, while he and team-mate Sanjay Takale kept their Cusco cars on the roads to complete the first day. 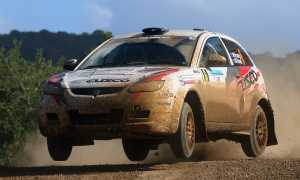 The harsh weather conditions continued on day two, which saw the cancellation of several stages and Young says it was the right call as the two-wheel-drives would have struggled to get through.

“The safety cars couldn’t get through, so there is no way we would have got through in a two-wheel-drive. While it’s a real shame to lose stages, the right call was made for safety reasons, and it didn’t really affect us too much,” said Young.

As an added bonus the 21-year old collected valuable points for his Pacific Cup fight which finishes at the next APRC round in Australia. Young says he is particularly interested in winning the Pacific Cup after winning the other Asia Cup title last year.

The next rally on the APRC calendar is the third round of the season, and the final Pacific Cup event, at the International Rally of Queensland in Australia. Based out of the Sunshine Coast town of Caloundra, it sees crews compete across the typically fast, tree-lined roads typical of eastern Australia.