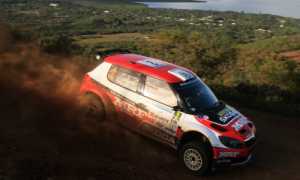 The top two drivers competing in the Asia Pacific Rally Championship (APRC) drivers’ championship are tied on equal points, despite being penalised by event officials at the finish line, following a challenging weekend at the second round held at New Caledonia.

Kopecky says: “There was no pressure and I was relaxed in the car, there was one stage in the North I enjoyed and each time I was able to go quicker than Gaurav, so it was good for us.”

“We are now on equal points with Gaurav, and that’s good for championship. If you have a close battle from the start it’s always better. Next is Australia… I’ve never been there, so a new country, a new rally and we are looking forward to it.”

Meanwhile, reigning APRC Champion Gill remains optimistic about the championship battle this year and is now looking forward to the International Rally of Queensland, where he hopes his experience will again pay off against his main-rival and team-mate.

“We had a good lead and a healthy margin but unfortunately we got caught out by the conditions yesterday, and found a tree on the exit of a corner. It wasn’t so good for the car and we bent a suspension arm. Glenn [Macneall, co-driver] and I had to do some repairs and we drove the last stage very conservatively. We’re happy to finish the day yesterday, plus finish today fastest of the day, meaning maximum points in the kitty; it’s the best I could have done.”

Next on the leader-board, Kiwi driver Michael Young consolidated his championship chances in his Cusco Racing Proton Satria Neo by finishing third with his rivals retiring due to mechanical failures or off-road excursions.

“It was such a tough rally we’re happy to get third, it’s so hard on the car the main thing is surviving it was so slippery, we’re just happy to make to the end. It was big bag of points for us and that’s what the championships all about, scoring every time,” explained Young.

Young now leads the Production Cup title over Mark Pedder who retired after an off-road excursion in his Pedders Suspension Mitsubishi Evolution, and Sanjay Takale who went out with engine failure on Day 2 in his Cusco Racing Subaru Impreza.

In a double-win, Young also overtook Australian Tom Wilde for the two-wheel-drive lead, after Wilde went off in the slippery conditions, and then later retired alternator problems in his Verandah Apartments Renault Clio. The two-wheel-drive battle will resume in Australia; Wilde’s ‘home’ rally.

In an interesting twist, torrential rain forced the cancellation of several stages during two days with road conditions being described as treacherous; but it ultimately did not affect the results of the APRC crews.

The next rally on the APRC calendar is the third round of the season, and the final Pacific Cup event, at the International Rally of Queensland in Australia. Based out of the Sunshine Coast town of Caloundra, it sees crews compete across the typically fast, tree-lined roads typical of eastern Australia.
Rallye New Caledonia 2014 Results.
1. KOPECKY Jan – DRESLER Pavel, SKODA FABIA S2000, 02:16:40,4
2. GILL Gaurav – MACNEALL Glenn, SKODA FABIA S2000l + 00:06:12,8
3. YOUNG Michael – READ Malcolm, PROTON SATRIA NEO , +0:00:25,1