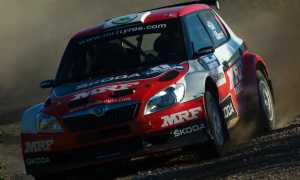 Indian driver Gaurav Gill is one step closer to clinching the 2013 FIA Asia-Pacific Rally Championship title after taking a dominant victory on this weekend’s Rally Hokkaido at the wheel of his Team MRF ŠKODA Fabia S2000. Title rival and team-mate Esapekka Lappi was forced to retire for the third time this season when suspension failure on his Fabia thwarted his charge.

Forming the penultimate round of this year’s coveted Asia Pacific Rally Championship (APRC), Rally Hokkaido is synonymous with fast and often narrow gravel roads. The stages caught out a number of drivers over the course of a three-day event based in and around the rally base of Obihiro. 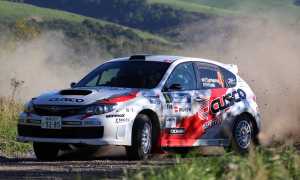 Lappi was the first APRC driver to fall foul of the tough Japanese tests when he incurred suspension damage on Saturday’s ninth test. With the Finn unable to restart on day two, Gill began Sunday’s stages with a comfortable lead. The Team MRF driver adopted a cautious driving approach in order to secure crucial championship points and now leads the overall standings by 13.5 points. 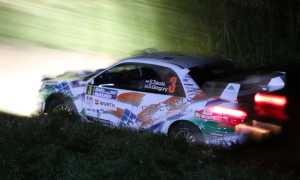 Further down the field, MRU Motorsports driver Sanjay Takale was keen to make amends for a mistake on the previous round in Malaysia and leave Japan with as many APRC points as possible. The strategy paid off as the Indian drove a mature rally in his Subaru Impreza to finish second placed of the APRC competitors. Takale was also been crowned the winner of the APRC Production Cup after securing enough points to take the title with one round still remaining.

Coming home third out of the APRC crews was Malaysian Rally winner Michael Young (Cusco Racing). The New Zealander won both the two-wheel-drive and Junior Cup sections in his Toyota Vitz. Fourth place went to Young’s team-mate Hiroshi Asakura who entertained the home crowds in his PROTON Satria Neo. 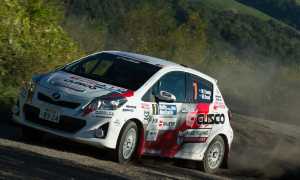 Guarav Gill (India), first position and FIA APRC points leader: “It’s been a really tough weekend – a very long, hard rally and it’s not been easy at all so we’re relieved to win today. We started off with a good battle with Esapekka Lappi but then he had some problems so we were left with the advantage. Today we had to play smart, keep out of trouble and thankfully it paid off in the end. We were cruising this morning but I think we actually drove too slowly – these cars can be more difficult to drive when you’re not on the limit because there isn’t much traction so we needed to up the pace to ensure we finished with no dramas. We’re just happy to have made it to the end in one piece and with more points for the championship.”

Yuya Sumiyaya (Japan), FIA Asia Cup winner: “We are very happy to have finished with maximum points. Today’s stages were high speed so we tried to keep the car on the road and keep hold of the lead. Anything can happen on these roads as they are very rough on the car – the smallest mistake could put you out of the rally. Now we look ahead to the next Asia Cup round in Thailand which is a new rally for me. It’s going to be tough to beat (Shuhei) Muta again but we will push there and see what we can do.”

NEXT ROUND: China Rally, November 2-3