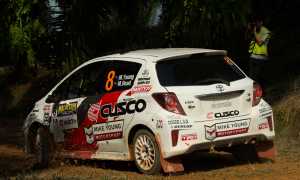 Toyota driver Michael Young has claimed his maiden victory in the FIA Asia-Pacific Rally Championship as title rivals Gaurav Gill and Esapekka Lappi both hit trouble on the Malaysian Rally, which finished today (Sunday) following two days of dramatic competition in the sun-baked plantations north of the event base in Johor Bahru.

While Lappi was unable to restart following his retirement with engine failure on Saturday’s fifth stage, Gill returned to the action on the final morning and scored sufficient leg bonus points to move to the top of the APRC standings by half a point with two rounds remaining. Elsewhere, Shuhei Muta triumphed for Subaru as the three-event FIA Asia Cup got underway.

Gill was the first of the expected frontrunners to falter when contact with a bank on stage four left his Team MRF ŠKODA-entered Fabia Super 2000 beyond immediate repair. The Indian had been on top form prior to his early exit having won the opening three stages. His misfortune handed top spot to team-mate Lappi, whose lead lasted until the following test when his Fabia’s engine failed and triggered the Finn’s second retirement of 2013.

With both MRF ŠKODA drivers out, Sanjay Takale seized the initiative in his Subaru Impreza only to retire on stage five with fan belt failure. Like his fellow countryman Gill, Takale – second in the APRC points prior to the start – also returned to the action on Sunday but only managed to complete one stage before going off the road and stopping for good. 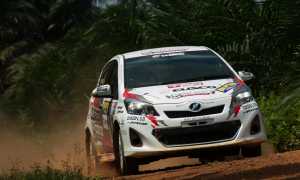 As Gill cleaned up the Sunday stage wins by going fastest on all of leg two’s seven runs, New Zealander Young and new co-driver Malcolm Read performed without fault in the intense heat to claim top APRC points in their Cusco Racing-run Toyota Vitz RS. Young, aged 20, is understood to be the youngest winner of an APRC round.

Yuya Sumiyama, the defending Asia Cup champion, had been leading the division following Lappi’s exit only to retire his Impreza on stage 11. His misfortune promoted fellow Japanese Shuhei Muta into the class lead in a similar Cusco Impreza. With Gill and Lappi out of contention in their pacesetting ŠKODA Fabias, Muta also claimed the overall event victory.

As well as landing the APRC honours, Young took second in the Asia Cup with Thailand driver Chaiyan Longton third in a Suzuki Swift. Tomohide Hasegawa’s heroics were rewarded with fourth place after the Japanese was forced to limp his Mitsubishi Lancer through the bulk of Saturday’s stages with a broken turbo.

WHAT THEY SAID:
Michael Young (New Zealand), APRC winner: “It’s great, we’re absolutely stoked. This result is great for our championship fight but the next round in Japan is also important for us as it’s both Cusco’s and Toyota’s home rally. The service crew all did an amazing job this weekend and so did Malcolm [Read] who read the pace notes faultlessly all weekend.”

Shuhei Muta (Japan), FIA Asia Cup winner: “This was my first time in Malaysia. It was difficult and tough but I’m very happy to win. I only came here for experience and to study the roads so I didn’t push, I just try to finish. Now I look forward to Hokkaido because it’s my home rally and of course we can push.”

Gaurav Gill (India), FIA APRC points leader: “We made a mistake yesterday and went off the road, damaging the radiator. We decided not to continue to save the engine for today. It was another learning curve for us. The gap between [Esapekka] Lappi and I is now really close but Japan is next and I really like that event. We should be able to push there.”