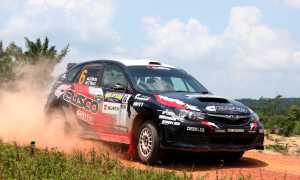 Japanese driver, Shuhei Muta, has driven his way to first overall at the 2013 Malaysian Rally, the fourth round of the Asia Pacific Rally Championship despite competing on these roads for the first time in his life but perhaps was aided by the unusually fine weather conditions.

Driving his Cusco Subaru Impreza, Muta kept to his promise of “driving steady,” throughout the rally was awarded with the victory after his main rivals retired due to mechanical issues or off road excursions.

“This was my first time in Malaysia. It was difficult and tough but very happy to win. I only come here for experience and to study the roads so I didn’t push, I just try to finish,” said Muta.

“Now I look forward to Hokkaido [Japan] because it’s my home rally and of course we can push.” 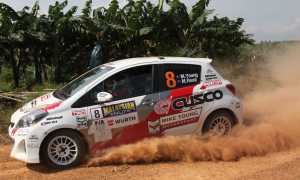 Following Muta was New Zealander, Michael Young, who put in a stellar effort in his Cusco TRD Toyota Vitz and finished in second place after battling with Chaiyan Longton all weekend.

“It’s great, we’re absolutely stoked,” said Young, “this result is great for our championship fight but the next round in Japan is also important for us as it’s both Cusco’s and Toyota’s home rally.”

“The guys [service crew] all did an amazing job this weekend and so did Malcolm [Read] who read the pace notes faultlessly all weekend.”

Rounding out the podium in third, was Chaiyan Longton in a Suzuki Swift, who lost significant time to Young after a gearbox failure during the first day and a puncture on day two. 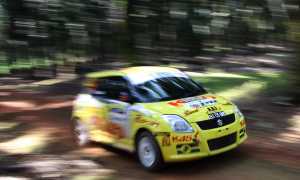 However, it was a double win for Young as he also took out first place in the APRC registered drivers’ championship ensuring his APRC campaign is back on track.

Gaurav Gill has also ensured his APRC campaign remains strong after winning the second day of the rally and now sits in first, half a point ahead of team-mate Esapekka Lappi with just two rounds to go.

“We made a mistake yesterday and went off the road, damaging the radiator. We decided not to continue to save the engine for today,” said Gill, “It was another learning curve for us but we were still able to score maximum points for the championship so that was good.”

“The gap between Lappi and I is now really close but Japan is next and I really like that event. We should be able to push there.”

Sanjay Takale, another top APRC championship contender, also re-joined the Malaysian Rally today but got stuck in a ditch during the morning stages and was unable to continue the day. 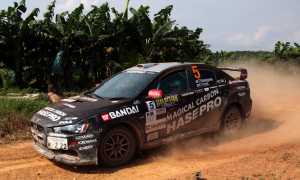 Meanwhile, Tomohide Hasegawa also had more problems with his Mitsubishi Evolution but managed to bring the car home to finish the rally and score valuable points for his Asia Cup campaign. 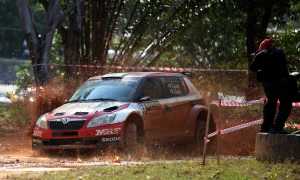 Unfortunately 2012’s Asia Cup winner, Yuya Sumiyama, failed to finish the rally after leading the Asia Cup battle for most of the event when his Subaru Impreza’s engine failed prior to the midday service leaving him stranded.

The APRC’s next event is Rally Hokkaido in Japan, set to be held on the 27-29 September 2013. Both the APRC drivers’ championship and the Asia Cup battle will continue on the northern island of Japan on roads many of the drivers are familiar with and enjoy driving on.

Story and Photos courtesy of aprc.tv