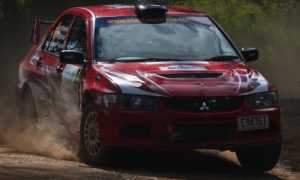 While 12 people helped guide Esapekka Lappi to victory on the International Rally of Queensland last weekend (we know this because we’ve seen the photo), Simon Knowles relied on the support of three people to clinch the FIA Pacific Cup in true David versus Goliath style.

The Australian veteran trailed Lappi’s Team MRF Skoda colleague Gaurav Gill following the opening two rounds in New Zealand and New Caledonia but took full advantage of Gill’s exit in Australia to snatch the title spoils in a Mitsubishi Lancer co-driven by his wife Margot and worked on by a two-person team of mechanics.

“We’ve had a great weekend and to get the Pacific Cup is just incredible,” said Knowles. “We really feel for Gaurav but to finish first, first you must finish. Considering there is only four of us; myself, Margot and two service crew guys, we never expected this but we’re really happy. But even if we’d finished second, I will still feel as though we’d have won. We’re a four person team going up against the big boys.”

Knowles claimed the Pacific Cup by three and a half points from Gill, who retired in Queensland with a rear strut failure. Australian Matt van Tuinen finished third in the final standings despite a back injury – sustained in a crash in New Caledonia – ruling him out of competing on home soil.