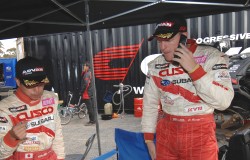 There’s just a week to go before the start of Rally Hokkaido. Along with the APRC regulars, there’ll be a large field of experienced Japanese campaigners. And added to the mix with be Dean Herridge, the 2008 Pacific Cup champion re-signed by Cusco after completing his initial contract of three APRC events.

So far this year Herridge’s focus has been on winning the Pacific Cup, and he’s opted for caution rather than victory. "It’s very rare you’re thinking ‘I’ve got to run at 95%’. It’s probably that you’re minimising risks by not hitting that big hole or culvert as fast as you might if in an outright fight."

But with the ‘cup’ locked away, will Dean be free to ‘let the handbrake off’ and fight for outright honours? "You’d have to say ‘Yes’, but I don’t know that we have the handbrake on that hard! I’m sure that’s what the team expects. I’ve locked away the Pacific Cup, third in the championship and six points off the lead."

"This will really dictate whether it’s worth extending the campaign yet again. And even have an outside chance of winning the championship, which wasn’t the goal at the start of the year, so anything from here on is a bonus." 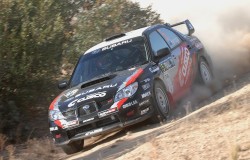 And Herridge has plenty of Hokkaido experience, having completed for Subaru Rally Team Japan at P-WRC level. "The roads changed; this year the WRC moves to a different location, and we’re now using some of those WRC roads. I’ve already spoken to Chris (Murphy) and sent him some of my pace notes from 2006, and it looks like some of the stages are common. So we’ll at least be running around on some of the roads that I’ve done before in the past. I think the Cusco car will be the best package that I’ve had to drive in Japan, so that should help us with some of the stage times."

"You’ve got a lot of guys with a lot of experience. I’ll be doing a good job to keep up with (my team-mates) Hiroshi and Sumiyama, with the car speed they showed there last year. I’m hoping that I can benefit from some info about car setup!"

But what a great event; the crowds are really enthusiastic. It should be a great atmosphere and a really good event in an interesting time in the championship."

And while Rally Hokkaido is an unexpected bonus for the West Australian, is there a chance we’ll see him in more events this year? "…From a Dean Herridge and a Cusco combination point-of-view, this round could be pivotal to what we do in the future, for the rest of this year and even into 2009."

"We’re still in the mix for the championship. Cusco have given us the chance of another rally. Let’s see how it goes for the weekend. If it goes our way, and it doesn’t go the way of particularly Cody and Katsu, then let’s look at Malaysia."

"If those two guys had a bit of a horror weekend, then maybe Malaysia would come up. But a great opportunity, and we won’t die wondering sitting at home watching the results. We’ll be there in the mix."

Rally Hokkaido starts next weekend on Japan’s northern-most island, and we’ll have a full event report here on APRC Live.

Photos courtesy of Cusco. Head over to www.deanherridge.com to hear a full interview with Dean.