It was a struggle from the opening stage, but Dean Herridge has claimed the inaugural APRC Pacific Cup at Rally Whangarei. 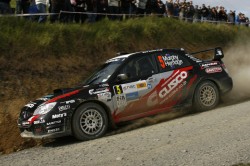 Going into the event, Dean held a comfortable eight point lead to Katsu Taguchi and Jean-Louis Leyraud, both on 19 points. If he could run finish second in the Pacific Cup standings at Rally Whangarei, Dean would claim the Cup.

But problems slowed the West Australian from the very first stage of the event. Problems in the gearbox of his Cusco Subaru meant he ran the opening four stages without 5th gear, and he tumbled down the timesheets. By the time he and co-driver Chris Murphy made it back for first service, the #5 Cusco car was 51 seconds behind Taguchi and, critically, seven seconds adrift of Leyraud.

“We lost fifth gear completely. So we’ve got that problem, maybe by changing the gear box (we’ll fix it). I think we’ve got a centre differential problem as well. The car’s just been a pig the whole morning. It’s a lot to do in one service, it’s going to test the boys out but we’ll see how it goes”.

In the afternoon, things were better in the car, Dean and Chris moving past Jean-Louis on stage six to complete the day in second place.

“We’re trying our backsides off. But what we’re pleased about is getting back in front of Jean-Louis after our dramas this morning. I’m driving as hard as I can but we just don’t have the speed with this package at the moment, but it’s a good day and it gives us some points. That’s what we need.” Sunday was better, and although the overall performance wasn’t as good as they would have liked, Dean and Chris made it home second behind Taguchi, to clinch the Pacific Cup.

“A little bit easier, we’re still struggling for pace. It was just sort of (maintain the) status quo really. We’ve won the Pacific Cup for the year. That was our objective when we joined the team, so ‘mission accomplished’. A bit frustrated with the result that we weren’t good enough this weekend but we’ll take home the Cup which was the big priority for our season.”

In overall APRC event, Cody Crocker took his second win of the season, completing the rally with a 31 sec lead over Taguchi, with Scott Pedder just under six seconds behind, and then Dean in 4th place. A full report on the event will appear in the next APRC Live podcast.

The final (unofficial) points tally for the Pacific Cup is: