Mike Young is set to tackle one of his favourite events in Japan with his Japanese team, Cusco Racing, this weekend at Rally Hokkaido, also held as the fourth round of the FIA Asia Pacific Rally Championship (APRC).

Young and co-driver Malcolm Read have enjoyed success at this event over the past few years, but this year are competing in Cusco’s new Toyota Vitz which Young says is a huge privilege and a “big change”.

“Cusco have entrusted their new Toyota Vitz to me in Japan which is a massive honour. It is based on the AP4 design and so far, hasn’t been driven a lot on gravel. It’s only done a tarmac and snow event so to be given the keys to this car means a lot to me,” said Young.

While the Cusco Racing Toyota Vitz is relatively unproven, Young has faith in his team and in the car. “I have driven a Toyota before for Cusco but that was only a two-wheel- drive and was a few years ago now. Although I also know that Cusco are very good at preparing cars so I’m sure they have everything ready to go and I’m really looking forward to the challenge 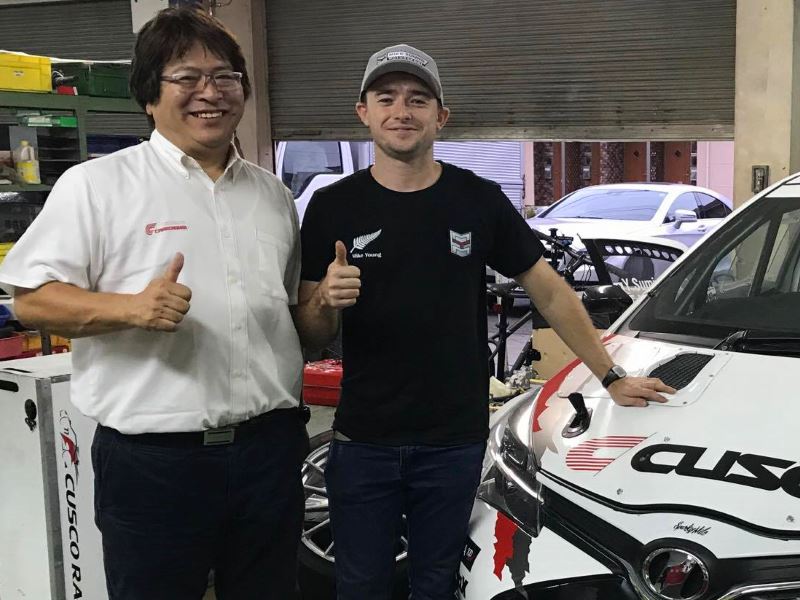 .
”The challenge will mainly lay with Japan’s roads which are known to be notoriously quick but quickly develop huge ruts in the road, potentially causing problems or lost seconds if you “get sucked outside of them”. However, Young says this suits his driving style and the new Cusco Toyota Vitz.

“I have done a lot of rallies in Japan and while the roads can be tricky at times, they are fantastic. I really enjoy them because they are so fast and you can really commit to them. Plus the handling of the Cusco Vitz should suit them, but I won’t really know for sure until I actually get the car into the stages later this week.”

Reading the notes again for Young is fellow Kiwi, Read, who has done a lot of domestic events in New Zealand this year but says he is also looking forward to getting back with the Cusco team in Japan.The rally gets underway at the ceremonial start on Friday 15 September at 4.45pm at the Kita Aikoku Service Park near Obihiro. Crews then compete across 222 kilometres of closed special stages, before finishing back in Obihiro at approximately 5.30pm on Sunday.

After Rally Hokkaido, Young and Read are set to compete at the World Rally Championship (WRC) event at Coffs Harbour during November, in a Citroen, in his first WRC start. Following this international event in Australia, the duo will head to India with details of their drive announced in the following weeks.

Fans can follow Young’s progress, and support his campaign by purchasing MYM merchandise, through his Facebook page – www.facebook.com/mikeyoungmotorsport.