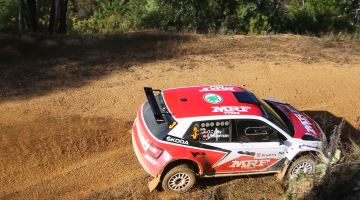 Ole Christian Veiby is in Australia for the second round of the FIA Asia-Pacific Rally Championship (APRC) this weekend. “I will be disappointed if I’m not fighting for the victory” he said.

The 20-year-old from the city of Kongsvinger in Norway made his debut as a works driver for Skoda Motorsport about a month ago. He finished second in the opening round of the APRC after being in the lead for most of the event. He lost his brakes – and the victory – with three stages to go.

“I’m very motivated to get my revenge after what happened in New Zealand. Without the technical problems, I would have won. The target is to win this weekend, and if I’m not fighting for the victory, I will be disappointed” said Ole Christian Veiby, who is accompanied by Stig Rune Skjærmoen in the co-driver’s seat.

Rally Canberra, which is also part of the Australian championship, includes 230 competitive kilometer, divided into 13 special stages. The event is the second round of the APRC.

“I think we have better odds to succeed this time. In New Zealand, everything was new, it was the debut for Skoda Motorsport and I drove with MRF tyres, something that was completely unknown to me. Now we know what we are capable of ” he said.

In the opening round, he was beaten by his Indian team-mate Gaurav Gill, and Ole predicts a new fight between the two of them.

“This event is new in the APRC championship and I think that is an advantage for me. That means that no one has previous experience” said the Skoda driver.

As a participant in the APRC, Ole has to get used to long flights and big time differences. He traveled from Norway in the direction of “down under” last Friday. After a stopover in Bangkok, he made it to Sydney 24 hours later.

“You get that it’s a long flight when you have to have a stopover in Bangkok” he said with a smile.

“However, the flight itself is no problem. Skoda Motorsport gets us a seat in business class so the flight is comfortable. After arriving in Australia on Saturday, we have been working out properly to get rid of the jet lag” said Ole, who will also do a test before Friday’s shakedown.